John Sununu Spars With Soledad O’Brien Over Trump: ‘Why Is CNN So Fixated On This?’
video

John Sununu Spars With Soledad O’Brien Over Trump: ‘Why Is CNN So Fixated On This?’ 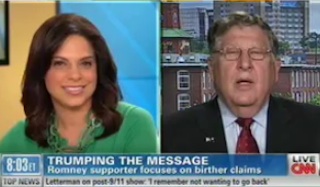 “Why the birther thing?” O’Brien questioned Sununu. “I don’t know,” Sununu shot back. “Why is CNN so fixated on this? Why don’t we talk about the jobs issue in this country?”

“Sure and we’ll get to that in a moment but let’s start with this,” O’Brien pressed.

“It’s CNN that wants to bring it up. I don’t want to bring it up. Mitt Romney made it clear that he believes that President Obama was born in the U.S. You had Donald Trump on last night. And now you are asking the question this morning. It’s CNN’s fixation,” Sununu responded sharply.

“You don’t think it’s a valid question of someone posing as a supporter/surrogate?” O’Brien countered. “He’s a high level big funder. He’s talking about millions of dollars he’s thinking of donating. You don’t think it’s a big deal that person talks about the fact that the President of the United States is not a citizen of the country?”

“I think it’s equivalent an issue as Bill Maher, who gave a million dollars to President Obama talking with such a foul mouth about women,” Sununu explained. “But you can’t pick your supporters in this country. The fact is that this country has a jobs problem and supporters of the President like CNN keep wanting to talk about other issues.”

“Is that because you don’t want to talk about the fact that a major fund-raiser is a birther?” O’Brien asked.

“It’s not an issue,” Sununu argued. “There is nobody in the Romney campaign that believes that the president was not born in the United States.”

“So then how come someone doesn’t say, Donald Trump is wrong?” O’Brien pressed.

“Donald Trump is wrong,” Sununu acknowledged. “The President was born in the United States.”

“That may be the first time,” O’Brien grinned.

“No it isn’t, ma’am,” Sununu snapped. “It’s just because you don’t read enough.”

Watch the testy exchange below via CNN: