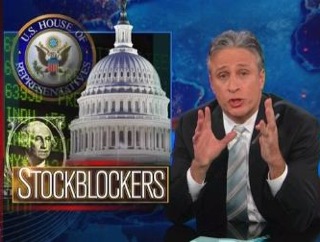 Taking a break from the 2012 campaign and the workings of the White House, Jon Stewart turned to the issue of Congressional insider trading– members of Congress privy to private information because of their committee assignments who can legally use that information for profit. As Stewart put it, it’s a system of checks and balances: “they deposit checks; it increases their balances.”

Stewart became increasingly frustrated with the language members of Congress used to describe the situation, and how each in turn evaded responsibility. It came to this: one member of Congress making the point, as if having just discovered America, that Congress should, in fact, follow the same laws that other Americans do. “Yes, Congress should follow the same laws as everybody else,” Stewart mocked, “I think that was part of the No Shit Sherlock Act of Always.”

Then he turned to the actual legislation– or, rather, members of Congress did, coming up with not just confusing interpretations, but no interpretations at all. Stewart played clips of Rep. Eric Cantor and Sen. Joe Lieberman discussing the legislation regarding trading. “What does it mean?” was a recurring theme in both of their interpretations as they read the law verbatim. Given that they were legislators, the fact that they were asking others what the law meant got to Stewart the most. “What do you mean, ‘What does it mean?’ You wrote the f*cking thing! Really, Lieberman?” he wailed. Debuting a dead-on impression of Sen. Lieberman, Stewart made the point that, when made to read actual laws, Congressmen “all sound like English professors– ‘this sentence, what does it mean?'”