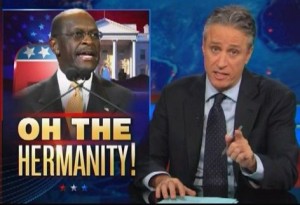 On The Daily Show, host Jon Stewart turned his sights on everyone’s favorite GOP candidate, Herman Cain, whom has taken to referring to himself in the third person, much to the delight of a weary nation.

Stewart briefly listed the steps to dealing with a scandal like Cain’s: Deny. Confirm, kind of (“Oh right… that thing”). Deflect (“I’M NOT GOING TO TALK ABOUT THAT ANYMORE”)! And, finally, organize a press conference in order to make up for how badly steps 1 – 3 were handled.

The host completely lost his mind, poor man, when it came to Cain’s statements about taking a lie detector test. You remember that he answered a reporter’s question about taking such a test by saying that he certainly would… but we won’t. Unless he feels there’s a need to. Like, perhaps, being accused by several women of sexual misconduct?

Also, in case anyone was uncertain about what the “Democratic machine” Cain referred to during his conference might be, it is something that 1) costs billions of dollars, 2) runs on solar power and 3) “turns hope into disappointment.” (“Yeah, fucking deal with it!” Stewart yelled at his audience.)

Stewart later advised Cain to blame his own party for the coverage the allegations have garnered:

Join the fun, via Comedy Central: