Let’s Get It On! Breaking Down MSNBC vs. the New Fox Primetime Lineup (Part I) 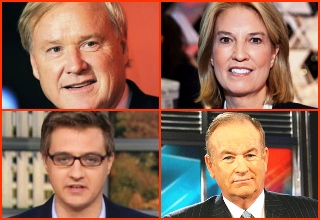 It seems so long ago, but remember the time when MSNBC President Phil Griffin boldly predicted his network would overtake Fox News in this non-election year that is 2013?

At the time, I praised Griffin for trying the change the culture of the Lean Forward network…all while concluding that even the thought of overtaking Fox this year had as much of a chance of happening as the Jaguars winning the Super Bowl. After all, given the current political calendar (no major elections means stripping MSNBC of its greatest strength: Bashing Republicans and pumping up Democrats while speculating over winners and losers at the ballot box), it was hard to see back in March where exactly the audience surge was going to come from in overtaking a competitor that oftentimes beats them by a 3-1, 4-1, even a 5-1 margin. In a related story, MSNBC is no longer in second place (where it was at the time of Griffin’s prediction), but has fallen behind CNN. Instead of closing ground on Fox, quite the opposite has occurred.

So given the context of Griffin’s prediction and also given the big changes at Fox News (the network hasn’t modified its primetime lineup in over a decade), let’s break down the new lineups at the two networks to see who has the upper hand both in terms of content and audience size moving forward.

Earlier this year, the smart money was on Greta losing her show after speaking with CNN about returning to the network. In retrospect, a Greta-to-CNN (or HLN) scenario only made perfect sense: Both networks performed exceptionally well during the Zimmerman and Arias trials, and legal sensationalism is the former lawyer’s bread-and-butter.

What made the speculation even more logical was the not-so-secret rumors of budding star Megyn Kelly (also a former lawyer) finally making the move to prime time. With Hannity and O’Reilly already under contract, passing the torch to the younger Kelly seemed to be the logical conclusion to the saga.

Except that it didn’t happen that way.

Instead, Shep Smith’s Fox Report was moved out of his 7:00 PM slot (to head up a brand-new breaking news team), making room for Greta’s move to an earlier time. The feeling here is the better strategy would have been to keep her at 10:00 PM and move Sean Hannity to 7:00 PM instead.

For the audience, the choice couldn’t be clearer in the hypothetical Hannity vs. Matthew scenario: If you’re a staunch conservative, tune to Fox at 7:00 PM. Same goes for die-hard Democrats and Matthews at the same time. It’s an hour of staunch politics, independents be damned.

But perhaps Roger Ailes is a big believer in seating his hosts at the table girl-boy-girl-boy (Greta, O’Reilly, Kelly, Hannity) style. Or maybe the Greta matchup against Matthews would instead give Fox viewers (somewhat) of a breather on the political front following the almost-all-political Special Report with Bret Baier. Yes, Greta does those kinds of stories and interviews, but she’s not ideologically-programmed the way Hannity or Matthews are.

That’s not to say, however, that Matthews will suddenly cruise to victory in this matchup. His offering is as worn-out as Hannity’s (which we’ll explore deeper on Friday). Here’s the Hardball nightly formula:

Look away from the camera (slightly down to the right) when teasing to commercial, (“You’re watching Hardball, only on MSNBC”)…

For whatever reason, Griffin actually continued to air Hardball twice at 5:00 PM and 7:00 PM before bringing Ed Schultz back to weekdays, a move that hasn’t exactly gone swimmingly (not that the previous scenario was the picture of success).

Now Matthews gets to take on Greta. It’s an interesting matchup, particularly since 2016 frontrunner Hillary Clinton will likely give an interview to Van Susteren (which she’s done before) before Matthews after the way she felt she was treated by him in 2008. And in the end, Fox will obviously win the numbers game due to a stronger lead-in (“Special Report ” over Al Sharpton’s “Politics Nation“) and a more devoted audience to the Fox brand in general.

The only matchup of the four primetime hours between the two networks that remains the same this fall. This isn’t exactly breaking news, but there’s just no scenario that allows Hayes to even remotely compete here. And that’s not a knock on Chris: Many have tried and failed, with Keith Olbermann coming closest and still losing comfortably.

All In is a show built for another time slot, like, say…Saturday and Sunday morning, a spot he occupied quite comfortably. But in primetime, Hayes simply doesn’t connect. To sum it up in one example as to why, here’s the 34-year-old’s answer during a recent interview with The New Yorker when asked about his ratings woes:

“Looking at day-to-day ratings tickles the worst instincts human beings have on casual inference. It creates cargo cult. It creates rain dances. It’s like, “Oh my God, the number’s good today. What did we do yesterday? Well, we danced, and it rained. So let’s dance!”

Now, I’m a fairly social guy. I have friends who are liberal, conservative, libertarian, politically apathetic (the last probably being the largest of these four groups). Without hesitiation, I can tell you….that none, NONE of them would ever utter anything resembling casual inference, cargo cults or rain dances, regardless of question. Simply put, hardly anyone on this planet actually talks like that. Hence the whole-connecting-with-a-primetime-audience-problem-thing…

So if there’s a hole in the Fox lineup, it ain’t at 8:00 PM. Outside of MSNBC signing O’Reilly’s buddy Jon Stewart for this time slot (who is signed through mid-2015 with Comedy Central), it will stay in the Fox win column about as long as Wyoming continues to be a red state.

Coming up Friday: Maddow vs. Kelly (the best of the four matchups) at 9:00 PM, and O’Donnell/Baldwin vs. Hannity.