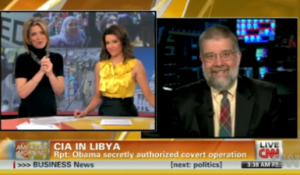 On CNN this morning, former CIA Counterterrorism analyst Michael Scheuer appeared with Kiran Chetry and Christine Romans and was not happy with President Obama’s actions in Libya. Scheuer is not optimistic about success in the country and wasn’t pleased to hear Romans offer up any possible rationale for American intervention there.

Scheuer was adamant that the U.S. should never have gotten involved in Libya because “I’m not sure that the opposition, if it takes power, is going to be much better than was Gaddafi.” Arguing that Libya was “none of our business,” Scheuer fears that our involvement will be a recruiting tool for extremists, since “in the Muslim world this is Americans killing Muslims again, and it looks like it’s for oil.” The increasingly tense interview got a little more uncomfortable when Scheur referred to “the rather crazed Ms. Rice at the UN” and Romans took exception to the description.

Scheuer then concluded that when no American interests are at stake, we should not be spending money “at a time when we’re nearly bankrupt.” However, Romans disagreed with the argument, suggesting that the problems in the national economy and Libya were two separarte issues. Scheuer laughed and attacked back, “they’re not separate issues ma’am, you’re just carrying the water for Mr. Obama.” Romans, not eager for that to be the last word, passionately responded, “I’m certainly not carrying anyone’s water! And, I will assure you of that.”