Michelle Malkin Jabs At Celebrities: If You Think Obama Is Your Dad, Boyfriend, Or God, You Need ‘Therapy’ 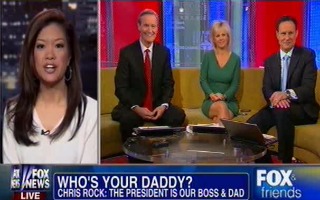 On Thursday, conservative columnist Michelle Malkin joined the hosts of Fox & Friends to weigh in on the appeal made by celebrities at a press conference on Wednesday for stricter gun laws. Among the celebrities who spoke was comedian Chris Rock. He said that President Barack Obama and the first lady are “the mom and the dad of the country” and they should be listened to as parental figures. Malkin thought that this kind of sentiment, among others by prominent liberals who have confused the president for a family member, is a sign Rock needs “group therapy.”

“That was a bizarre little appearance,” Malkin said of Rock’s appeal for new gun laws. “It looked like a hostage video to me.”

“Maybe it’s dawning on him in some sector of his brain that this is not good for his career?” Makin asked.

“I don’t know a dad who wears mom jeans,” Malkin added, taking a dig at the president’s fashion sense.

“More importantly, we have Chris Rock treating Obama as his father. Sandra Fluke treating Obama as her boyfriend, and Jamie Foxx who said during the campaign that Obama was our ‘lord and savior.’ These people need group therapy,” Malkin concluded.

At the end of the interview, Steve Doocy read a quote from actor Bruce Willis who recently spoke out in support of the Second Amendment. Malkin said she was glad to hear some “common sense” from a Hollywood actor.