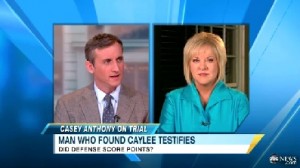 This morning on Good Morning America, HLN’s Nancy Grace and Mediaite founder and ABC News legal analyst Dan Abrams continued to analyze the defense’s strategy in Casey Anthony‘s trial, particularly whether the defense was able to “score points” by putting the man who found Caylee’s body on the stand to testify.

So if there’s anything to take away from this trial, it’s that the defense has been adept at airing out this particular family’s piles of dirty laundry.

Later, when Abrams opined that yesterday had been the “most substantive day” the defense has had and that they were able to make some progress, Grace broke in, asking “A substantive day? That whole day didn’t amount to a HILL OF BEANS!” Don’t you ever change, Nancy Grace. Not ever.

Grace did cut to the core of the defense’s strategy, which seems to be throwing everything against the wall and “seeing what sticks.” The big question remains, of course: Will Casey Anthony testify?

Check out the segment, via ABC: