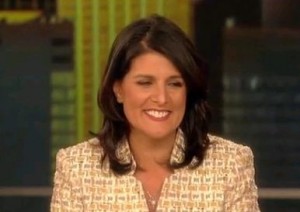 Nikki Haley, the young Indian-American governor of South Carolina, was on The View to talk about her new book Can’t Is Not An Option, but the segment ended up going in a surprising number of directions. First, Barbara Walters asked Haley about rumors that Mitt Romney may be considering her as his running mate in the 2012 election. She deflected the rumors by saying that if asked, she would refuse, since she “made a promise to the people of [South Carolina]” to serve her term through 2015.

Walters then questioned Haley about rumors of infidelity that plagued her as a state representative, but it was still kind of a softball question since Walters just wanted to know “how [Haley survives] this kind of thing.” Haley said that those stories are illustrative of a larger problem with the media, and that people should stop listening to “these unaccountable, anonymous bloggers” who are generate scandals with no basis in fact. Though Haley refuted the cheating story, she did confirm that the South Caroline statehouse still flies the Confederate flag. Walters questioned why Haley, who faced racism growing up in the South, wouldn’t try to have it taken down? Haley noted that there was a bitter debate over the placement of the flag and that it does not share the grounds with an African American monument nearby out of respect for the state’s history, but that moment of controversy was quickly supplanted by Elisabeth Hasselbeck’s next question. She wanted to know about Haley’s stance on women’s rights, which are often assumed to be the purview of Democrats rather than Republicans.