North Carolina Rep. Wants To Ban People On Welfare From Playing The Lottery 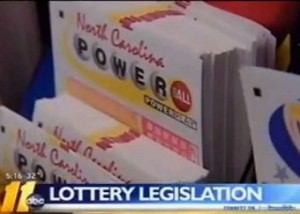 If you’re living on welfare in North Carolina, you may soon be out of luck when it comes to the lottery. Raleigh-Durham’s ABC affiliate WTVD-TV is reporting that lawmakers in that state are proposing legislation that would bar people on welfare or in bankruptcy from purchasing lottery tickets.

As reporter Anna Laurel explains, “the lawmaker drafting this legislation told us today that the vendor selling the lottery ticket would be penalized if they know the person is on welfare or in bankruptcy, which has some questioning if this law really solves any problems.”

The Republican congressman behind the bill, Rep. Paul Stam laid out his reasoning by saying, “We’re giving them welfare to help them live, and yet by selling them a ticket, we’re taking away their money that is there to provide them the barest of necessities.”

But as the Raleigh news team discovered, local lottery vendors have serious concerns. One clerk was quoted as saying, “I don’t feel comfortable to ask my customers what their financial status is… it’s not my business.”

Meanwhile, North Carolina’s NAACP president Rev. William Barber said that while his organization doesn’t “agree with the lottery to start with” he would prefer to have Rep. Stam focus on larger issues “Rather than Mr. Stam having a side argument, ask him to stop blocking labor rights for poor people and working people. Ask him to have a real conversation about real wage.”

Watch video below, via WTVD-TV: