O’Reilly to Kurtz on 60 Minutes’ False Benghazi Report: ‘Cut Them Some Slack’
VIDEO

O’Reilly to Kurtz on 60 Minutes’ False Benghazi Report: ‘Cut Them Some Slack’ 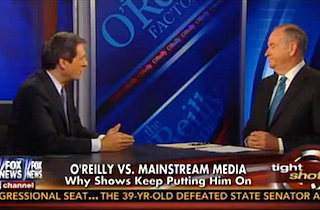 On Sunday morning’s Media Buzz, host Howard Kurtz quizzed fellow Fox host Bill O’Reilly on whether he was still anathema to mainstream media, and why he and Fox News didn’t cover 60 Minutes’ erroneous Benghazi report more, given the network’s year-long fascination with the story.

“You like to set up this narrative of you vs. media elite,” Kurtz began, “and I think you’ve become more accepted in recent years.”

O’Reilly disagreed. “If you look at the reviews of Killing Kennedy, the people who hate me reviewed me, not the movie,” O’Reilly said. “That’s still there. If I ever fall, they’ll be like jackals on my carcass. They hate me, because I represent something that’s very feared in America. I made my success outside of the establishment. They don’t like that. And the right doesn’t like me either, if you listen to talk radio, because I don’t toe the line.”

Kurtz asked the host about the now-retracted 60 Minutes report. “A lot of people are saying, ‘Boy, that apology didn’t get much attention on Fox News because it doesn’t fit their conservative agenda of pushing Benghazi as a big story,'” Kurtz said.

“I didn’t report it big,” O’Reilly said. “Maybe that’s a valid criticism against Fox News. I don’t run Fox News….Everybody makes [mistakes]. And it doesn’t really have anything to do with people’s lives. People’s perception of Benghazi wasn’t changed by Lara Logan’s report. They brought in a guy who was a charlatan. He faked them out, he wanted to sell a book, he wanted money. Happens. I feel sorry for 60 Minutes. I think they’re a noble enterprise. If I thought they weren’t I’d go after them. But I’ll cut ’em some slack on the mistake.”

“They had to,” O’Reilly said. “They were losing credibility. The people who apologized for Barack Obama now are losing ratings and readership. They’re hemmorhaging. They’re going out business. So it was a business decision. But if they could, they’d stay with their guy. They have a lot of emotion tied in.”

Watch the full segment below, via Fox News