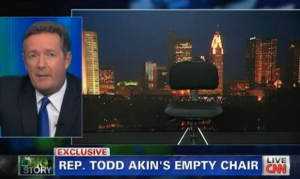 Earlier, Democratic Sen. Claire McCaskill was scheduled to appear on the show but canceled, Morgan said. Then, he said, Akin did the same, “at the last possible moment, leaving us and you looking at an empty chair. It’s a very nice empty chair, but it remains an empty chair.”

Morgan then extended an open invitation to the candidate:

Congressman, you have an open invitation to join me in that chair whenever you feel up to it. Because if you don’t keep your promise to appear on the show, then you are, what we would call in Britain, a gutless little twerp.

He digressed, turning instead to Rep. Jan Schakowsky, who said, Akin and Paul Ryan “like two peas in a pod, have endorsed the same legislation, that would limit women’s rights to access to contraception. That would make even rape and incest not reasons for having an abortion.”

Meanwhile, a small box in the corner of the screen remained focused on the empty chair, reminding us of Akin’s absence.