Rachel Maddow: Ron Paul Is Gaining In Polls Because Of His Opposition To War With Iran
video

Rachel Maddow: Ron Paul Is Gaining In Polls Because Of His Opposition To War With Iran

Maddow: Ron Paul Is Gaining In Polls Because Of His Opposition To War With Iran
Twitter share button 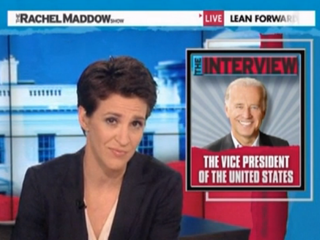 Rep. Ron Paul got an unexpected shoutout tonight from the other side of the aisle, as Rachel Maddow noted, after her extended interview with Vice President Joe Biden, that only Rep. Paul among the Republican candidates vocally opposed war with Iran. The comment came in response to the “pride” Maddow said she felt in the Vice President when he discussed the end of the war in Iraq, and his opposition to a second attack.

Compared to the way in which Vice President Biden discussed war, Maddow noted, Republicans were much more comfortable with the idea. “Even Jon Huntsman says that he would like to start a war with Iran, a preemptive war,” she noted, “Vice President Cheney even said we should have dropped a bomb on Iran last week.” The comments made her visit to Washington “striking,” she explained, comparing Republican ideas to the Vice President’s “pride.”

In her comments, though, Maddow made sure to note that there was one Republican who was not parroting this message. “Ron Paul is the only Republican presidential candidate who dissents from that view, who doesn’t say, ‘Let’s start another war.'” This explained, she noted, the “counter-intuitive, politically incorrect angle” in which the fact that “no one in the Beltway takes him seriously” doesn’t seem to matter, since “the latest PPP poll says Ron Paul is only one point away in Iowa.”