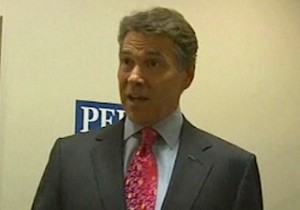 One of the stranger moments of last night’s CNN/Tea Party Debate featuring leading GOP presidential candidates came when moderator Wolf Blitzer challenged Texas Rep. Ron Paul (a Doctor) on how he would handle a theoretically uninsured and comatose man. Somewhat exasperated by Paul’s libertarian talking points, Blitzer pressed “would you let him die?!” At this point, someone in the audience shouted “yeah!” which was followed by a smattering of applause. The crowd’s reaction, it turns out, surprised Texas Gov. Rick Perry.

As Mediaite’s own Tommy Christopher points out:

The reactions of three or four audience members at a debate isn’t all that meaningful on its own, but this outburst follows last week’s Death Penalty Ovation at the Reagan Library debate, and another ugly moment at the Tea Party debate in which the crowd cheered for fed chairman Ben Bernanke to be tried for treason, a capital crime.

While Rep. Paul mercifully declined to leave coma-guy to die, he is simply suggesting a form of socialized medicine, only without the guarantee. He places moral responsibility for coma guy on “our neighbors, our friends, our churches,” which only differs from socialized medicine in that it burdens churches (who don’t pay taxes). That, and my neighbor has a lousy TV in his ICU.

But Perry thought it seemed out of character for a GOP event. During a breakfast event in Tampa, Florida, a local NBC News crew caught up with the GOP frontrunner who said “I was a bit taken aback by that myself,” before adding, “We’re the party of life. We ought to be coming up with ways to save lives.”

Watch the reaction from Perry below, courtesy of NBC News: