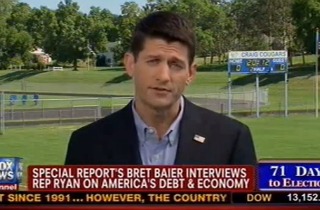 Earlier today, Congressman Ron Paul made an explicit non-endorsement of GOP presidential nominee Mitt Romney by saying he won’t give an endorsement speech at the RNC in Tampa because it “would undo everything I’ve done in the last 30 years.” In the wake of that news, Romney’s VP selection Paul Ryan has a plea for Paul’s libertarian supporters to consider voting for the GOP ticket anyway.

In a short preview of an interview set to air later today, the VP nominee told Fox News’ Bret Baier that “We see eye to eye on a lot of issues. We believe in sound money. We believe in economic freedom. We believe in the founding principles.”

“We believe this is a watershed moment for America,” he continued, “whether we are going to reclaim the American idea or a cradle-to-grave welfare state which is where I think the president is taking us. So, I think in the final analysis Ron, he and his supporters should be comfortable with us.”

Adding that “Ron is a friend of mine,” Ryan continued on to say that he’s worked with the libertarian Texas congressman for many years, and believes that his supporters have to make a choice “between the president’s failed leadership, the big government that he is offering, the borrowing that he is offering, the spending and regulating that he is offering which will give us a stagnant economy, a lost generation, not just a lost decade; and the Mitt Romney/Paul Ryan plan of reclaiming our founding principles, getting back to economic freedom and liberty and reviving this economy.”