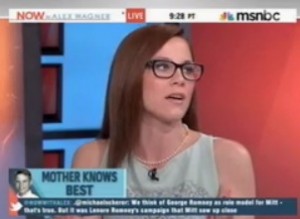 This isn’t the first time during this election that pundits have tried to psychoanalyze Mitt Romney based on his political lineage, but this latest round is pegged to a splashy Time Magazine cover story about how Lenore Romney’s 1970 run for the US Senate “shaped his life.”

Time‘s Michael Scherer explained that “we think of George Romney as the role model for Mitt. That’s absolutely true. George Romney’s picture is on Mitt’s bus,” but added that “it was Lenore Romney’s campaign that Mitt really saw up close. He was in Paris during his father’s failed presidential bid, when he talked about getting brainwashed. He took a leave of absence, the whole summer from college, and campaigned in 83 counties through Michigan with Lenore, and it was a painful experience, not just for Lenore, but the entire family.”

Alex Wagner added, “They talk about how devastating the loss was and the family really sort of circled the wagons and had to reassess who their friends were.”

Wagner then asked S.E. to explain misgivings she had voiced during a commercial break. “We should want to know more about our political candidates,” S.E. explained, “but I think amateur psychologizing around Romney’s upbringing, and what it makes him today, I find specious and weird.”

“I don’t find him to be cynical,” she added. “I find him to be an incredible optimist who keeps campaigning, losing, campaigning, losing. If he were really burned — I’m not trying to be funny — if he were really that burned — I’m quoting the article — by watching his parents lose these elections, I wouldn’t think he would be this optimistic and enthusiastic.”

Maybe S.E. wasn’t trying to be funny, but she succeeded anyway. In fairness to Mitt Romney, he did win one election in there somewhere, didn’t he? He didn’t just buy Massachusetts, right?

For what it’s worth, I completely agree with S.E. about this kind of armchair psych nonsense (and am totally down with “psychologizing” as an awesome new word). The media did a lot of this during the eight years that George W. Bush was in office, and it always succeded in making them look desperate for something to talk about, at best, and determined to hammer him into their predetermined narratives at worst. If we want to know who Mitt Romney is, there’s plenty of present-day evidence to evaluate.