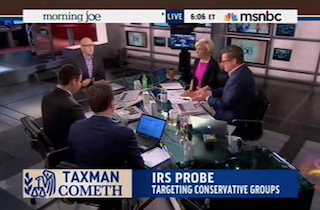 Morning Joe started the week with a segment about the “mind-boggling” IRS scandal, regarding the agency’s admitting to targeting politically conservative groups. The roundtable was unanimously outraged, with references to Richard Nixon and Willie Geist even stating it’s “tyranny.”

“Do these people not remember the Nixon administration?” Lisa Myers asked. “One of the abuses of power was his use of the IRS against his political enemies.”

Yet, the IRS has said it wasn’t politically motivated — which the panel agreed doesn’t make sense. Officials haven’t been upfront about the issue, Scarborough and Myers asserted, and their public statements appear to contradict what reports say regarding the timeline of what the IRS knew and when. It’s “indefensible.”

Political speech is sacrosanct, Scarborough argued. “Liberal and conservative Supreme Courts alike do not allow the government to tread on political speech. There is a wall around that, and the wall has been knocked down by the IRS for several years now.”

“There’s been many overblown claims of tyranny and abuse of power from the government over the last few years,” Geist jumped in, pointing to the “we’re coming for your guns”-type narrative. “This is tyranny. If this is the government, a nonpartisan agency coming after specific groups, this time it’s real.”

“I can’t imagine much worse than this,” Scarborough agreed. It’s “unspeakable,” and President Obama “needs to come out today and condemn this in the harshest terms, demand answers, and fire people.”