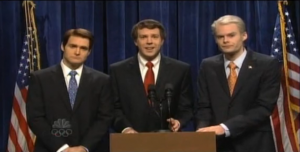 It was a bipartisan cheaters’ party in the opening sketch of Saturday Night Live this week, as the show used a familiar avenue to take on the Tiger Woods fiasco: politics. The C-SPAN segment featured Gov. Mark Sanford, Sen. John Ensign, and former Sen. John Edwards analyzing the media coverage of the golfer’s infidelity, and even suggesting that the public’s double standard is racial. Extramarital for everyone!

And though they each trade scandalous details — cover stories, hush money, a love child! — they remain incredulous about the lack of press coverage compared to Mr. Woods. Maybe it’s the number of women, they suggest, before one of the strangest lines in the clip: “Evidence of our other affairs is out there if the media would bother to look!” Is that so? Or is that funny?

But the clip also takes another sobering turn when it is suggested that the double press standard is racial: “We pray this isn’t about race. Our nation has seen too much of that.”

Like this season’s Obama and China opening, it’s almost as if SNL is deciding that making political or social statements outweighs their responsibility to make people laugh with their weekend sketch-comedy show. The entire thing sounds so much more like a dinner party polemic than jokes. Maybe it’s to be lauded, but it seems like a questionable direction, and judging by this clip, it’s getting more serious as the weeks go on. See for yourself: