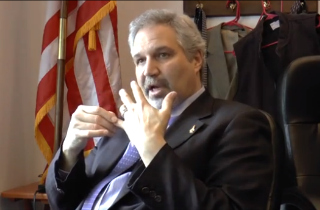 Alaskan State Sen. Pete Kelly is on a crusade against fetal alcohol syndrome. The Republican lawmaker wants to eradicate the defect so badly that he has devised a plan to flood local bars with state-funded pregnancy tests for female patrons.

Kelly told the Alaskan Senate this week that birth control might not be sufficient enough in preventing female binge drinkers from getting pregnant.

While that sounds like the Republican lawmaker believes the pregnancy tests will prevent conception, he told the Anchorage Daily News last week that his intention is to help notify women if they are pregnant, because “if you know you’re pregnant, you won’t drink.”

When asked whether he’d similarly use state funds to give out birth control in bars, however, he declined. “This assumes that if you know (you are pregnant) you’ll act responsibly,” he told the paper. “Birth control is for people who don’t necessarily want to act responsibly.”

“I’m not going to tell them what to do, or help them do it, that’s their business,” he added. “But if we have a pregnancy test, because someone just doesn’t know. That’s probably a way we can help them.”

Watch Kelly explain his proposal below, via Anchorage Daily News: