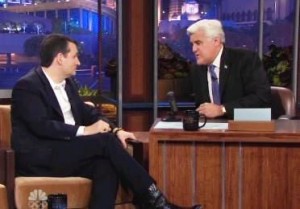 Senator Ted Cruz made his late night debut on The Tonight Show Friday, joining Jay Leno for a conversation about everything from Cruz’s crusade against Obamacare to the political consequences of the government shutdown. Leno poked and prodded Cruz for basically causing the shutdown and over a number of tactics and policy positions that Leno couldn’t quite understand.

Leno brought up all the negative press Cruz has received and in particular, all the national negativity Congress has received (which Cruz thought was still way too high). Cruz blamed “entrenched politicians” in both parties for the dysfunction, but Leno asked Cruz if he might be one of them because this attitude was “this this or this or I shut the government down.”

Leno said the Republicans should have let Obamacare fail on its own instead of letting the shutdown blow back on them. Cruz said he was “not a fan of shutting down the government,” but Leno said, “You looked like a big fan from where I was standing!”

Cruz talked about the “lost generation” of young people to an era of vast income inequality, slammed Obamacare quite a bit, and defended his support of background checks and enforcing existing gun laws when Leno pressed him on the gun control measures that failed earlier this year.

Towards the end of the interview, Leno groaned and asked, “We’re gonna have another shutdown in February? Are we gonna do this again?”