The NY Times Should Really Look Up the Definition of ‘Ultraconservative’ 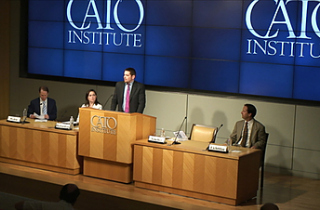 What reality is this?

While describing the story of how Chinese professor and dissident Xia Yeliang was dismissed from his Peking University job and has taken up residency at Cato, Lewin let slip a hefty dose of ideological confusion:

The political labels of Professor Xia and the Cato Institute, in Washington, are strikingly different. Professor Xia got into trouble in China for being too liberal, while the institute is known as libertarian or — less to its liking — ultraconservative. But the professor and Cato officials say they have the same focus.

Before we get to the “ultraconservative” part, it’s also obvious that Lewin misunderstands the well-known concept that, outside the U.S., the word “liberal” is used in the classical sense; and not as the U.S. version that has become synonymous with the expansion of government.

Liberalization around the world means the advocacy for a relaxation of government restrictions on speech, business, etc. And so the views of someone who advocates “liberalization” in a country like China are most certainly not “strikingly different” from the American libertarians at Cato. Lewin missing that natural ideological fit is perhaps telling of her own biases.

But Lewin’s attempt to sneak the “ultraconservative” phrase at Cato comes off as a cheap shot, or, “an attempt to create tension where there is none,” as Tim Carney wrote of it.

No one in their right mind would consider Cato “ultraconservative,” especially when a cursory glance at their policy recommendations shows support for same-sex marriage, legalized marijuana, reduced military spending, non-interventionist foreign policy, and relaxed immigration restrictions.

But, hey, I’m sure Lewin can point to a few Internet commenters who’ve called Cato “ultraconservative” and, thus, invoke the some say couching to which we’ve all fallen prey.

Some say the New York Times is run by a pack of space aliens; some say Fox News is firmly in President Obama’s camp; some say the Boston Marathon bombing was a false flag planted by the Illuminati. See how fun it can be?

Take it from this libertarian who’s been called everything from a “fascist with a bong” to a “pinko commie Obama shill,” libertarians can be touchy about ideological labeling and misrepresentation of their views. But that doesn’t excuse such hilarious confusion from a newspaper that dedicates itself to living in the nuance.