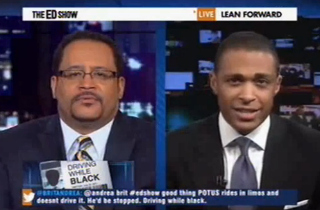 Following his highly-publicized alleged “driving while black” traffic stop this morning, former CNN anchor TJ Holmes appeared on MSNBC’s The Ed Show to discuss what he believes are the racial implications of his incident with Atlanta police. Holmes and guest host Michael Eric Dyson connected the traffic stop to what they perceive as a lack of improvement on the race relations front since President Barack Obama took office.

“Racial discrimination is a part of America that is hidden in plain site,” Dyson began. “It’s felt by millions of Americans and it was felt by a public individual and documented in a public setting.”

Holmes described himself as a “reluctant guest” because he “did not expect to be here documenting my experience.” He went on to explain that he was one-and-a-half miles from his driveway when stopped. “The officer had been following me for at least a mile, maybe even a couple, and he was following closely,” he described. “I knew something was up. I anticipated his lights coming on. Sure enough, they did.”

“I pulled over and do what I always do, which some people find crazy,” Holmes continued, “stick my arms out the window and cross my hands like this so that the officer sees my hands. That’s just something literally my mother has taught me to do.”

“Because you’re a black man, you don’t want them to think you have a gun,” Dyson clarified for the audience.

Holmes then claimed that the officer said he stopped the former CNN host because “I want to make sure you have insurance on the car.” He went on to say that he tweeted his experience because “I was frustrated at the time. I have wondered if maybe I made a mistake, if I did something wrong by enflaming people’s emotions, by using the phrase ‘driving while black,'” he said of the media firestorm that resulted from his racially-tinged tweets.

“Immediately, there were two sides clearly polarized on the issue: one side mothers, fathers, young black men who have gone through this experience; and another side that called me a racist. The ‘n-word’ has been thrown around today.”

“Talk about post-racial country,” Holmes lamented. “Well, we can’t have a conversation about race ever because every single time we go to our corners, we come out, we fight for a round, beat the crap out of each other, and go back to our corners and get ready to fight again and nothing gets done.”