Toronto Mayor Rob Ford Announces He’s Not Going Away, Will Seek Re-Election in 2014 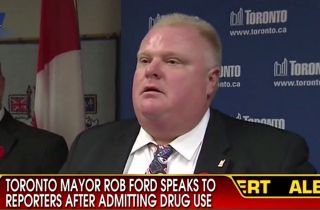 Hours after admitting to a gaggle of reporters on Tuesday that he has smoked crack cocaine, Toronto Mayor Rob Ford re-emerged from his City Hall office to make a formal announcement: He’s not going anywhere.

Rumors have dogged Ford for months now, after it was reported that video existed of the mayor smoking crack out of a glass pipe. He recently apologized for a slew of incidents in which he was publicly drunk, but refused to acknowledge the illicit drug use until this morning’s run-in with the press.

Full transcript of his Tuesday afternoon remarks below, with emphasis added:

With today’s announcement I know I embarrassed everyone in this city and I will be forever sorry. There is only one person to blame for this and that is myself. I know that admitting my mistake was the right thing to do. And I feel like a thousand pounds have been lifted off my shoulders. I can’t explain how difficult this was to do. I hope, I hope that nobody, that nobody, has to go through what I’ve gone through. I know what I did was wrong, and admitting it was the most difficult and embarrassing thing I have ever had to do. Folks, I have nothing left to hide. I would do anything, absolutely anything, to change the past. But the past is the past and we must move forward. I want to be clear: I want to be crystal clear to every single person: These mistakes will never, ever, ever happen again. I kept this from my family, especially my brother Doug, my staff, my council colleagues, because I was embarrassed and ashamed. To the residents of Toronto, I know I have let you down. And I can’t do anything else but apologize and apologize and I’m so sorry. I know, I know I have to regain your trust and your confidence. I love my job. I love this city. I love saving taxpayers money. And I love being your mayor. There is important work that we must advance and important decisions that must be made. For the sake of the taxpayers of this great city, we must get back to work immediately. We must keep Toronto moving forward. I was elected to do a job and that’s exactly what I’m going to continue doing. In 2010, I made a commitment to Toronto voters. I have delivered on that commitment and I will continue to deliver on that commitment of saving taxpayers money. But they have a choice: We live in a democracy, and on October 27, 2014, I want the people of this great city to decide whether they want Rob Ford to be their mayor. Again: I sincerely, sincerely, sincerely apologize. God Bless the people of Toronto. Thank you very much.

Upon completing his speech, several members of the audience let out audible chuckles of disbelief. It seems as though the city was expecting a resignation and instead got a contrite apology along with stubborn persistence to continue holding office.

Video below, via Fox: