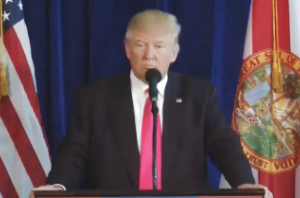 So Donald Trump, the man who calls himself the “law and order candidate,” effectively said at a Wednesday press conference that he “hope[s]” that Russia did, in fact, hack and steal the deleted emails of Hillary Clinton.

The Republican candidate spoke from his Florida golf course today, where he alternated between attacking the Democratic National Committee for their email leak while fielding questions about the nature of his relationship with Vladimir Putin. Trump has offered glowing praise of the Russian president in the past, and today he denied a previous statement of his where he said that he once spent time with Putin.

Trump’s relationship with Russia reentered the media spotlight with suggestions by Democratic officials and the FBI of the possibility that Russian hackers were responsible for the DNC breach. Trump and the Kremlin have both denied a connection with the hack and each other, and the mogul suggested to CNN’s Jim Acosta that he wants to work with Russia, though they probably have the national secrets held in Clinton’s lost emails: