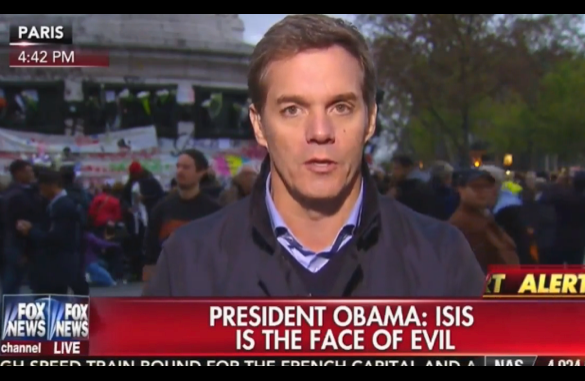 Hemmer appeared seething as he continued, “President Obama called the attacks in Paris a ‘setback’ at one point.” Before eventually welcoming in Baier to the conversation, Hemmer, standing with the backdrop of a growing memorial in Paris behind him, concluded:

“President Obama has made it quite clear in that Q-and-A that lasted more than 45 minutes that he has accepted there are evils in this world and evils in places like Paris, France and this is something that we all must face today… If you’re at home wondering with your own set of anger and your own set of fears about what can happen next, you are not alone, because that is precisely what you feel here in Paris, France. And if you were awaiting clarification on your feelings through that Q-and-A, you weren’t gonna get it.”