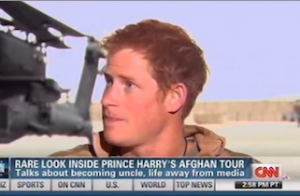 Britain’s Prince Harry completed a four-mouth tour as an Apache helicopter pilot in Afghanistan this week and CNN’s Royal Correspondent Max Foster was there to speak to the 28-year-old captain about his experience.

During one of their interviews, while Harry was on “VHR” or very high readiness alert, his regiment got the “call to fly” and he had to rip off his microphone and run to his helicopter.

The CNN segment also covered the simplicity of his accomodations while in Afghanistan, with the prince showing off his unmade, bare-bones bed. “This is my bed. I don’t really make it when I’m done here, which is a joy.”

And of course, Foster got Harry’s reaction to the news that he will soon become an uncle and the media’s constant coverage of his sister-in-law Kate Middleton‘s pregnancy. “I’m going to be an uncle. It’s very unfair they were forced to publicize it when they were, but that’s the media for you. But i only hope that she gets the necessary protection to allow her as a mother, mother to be, to enjoy the privacy that that comes with.”