Women Offer to Pay Bail for ‘Handsome Convict’; Why, Society 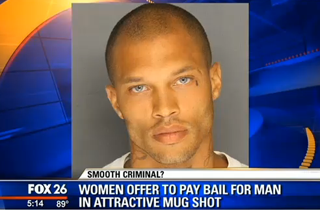 It’s the face that launched a thousand news stories — and now, it might get a convicted felon out of jail. The female fan base of Jeremy Meeks, whose mugshot went viral after the world learned that he suffers a severe case of Hot Daaaaayum Disorder, has vowed to crowd-fund his $900,000 bail.

While the talk is still a bunch of internet chatter, it’s still kind of unnerving internet chatter, like this Yahoo! Answers query: “His bail is $900,000. Seriously, I’m willing to pay it. How do I do that? and if I pay his bail, does that mean he won’t go to jail? and do you think he’ll marry me?”

TMZ’s headline about Meeks is pretty straightforward, and states that he’s “A REALLY BAD DUDE”:

The 30-year-old was charged in 2002 with robbery and corporal injury to a child. He allegedly jumped a 16-year-old and beat him to a pulp. Meeks copped a plea and was sentenced to 2 years in a California prison…

Meeks served his time and moved to the Spokane area of Washington, and in 2007, he was charged with identity theft and resisting arrest. According to legal docs … he was in a sporting goods store and tried to steal a package of pellets and when security guards saw him, Meeks screamed, “I’ll f*** you all up.” The guards peppered sprayed Meeks into submission. He was convicted and served time.

If we say that he’s also married, will they stop? No? Fine then.

Watch below via MyFox Houston: