CrossFit Evangelist Under Fire for Stunt at Berlin Holocaust Memorial

CrossFit evangelist and social media star Dave Driskell is in hot water after he posted a photo of himself doing a handstand atop a Holocaust memorial on Monday.

The Instagram photo, which has since been taken down, show Driskell holding himself aloft on top of one of thousands of slabs, or stalae, at the Memorial to the Murdered Jews of Europe in Berlin. According to the post, Driskell was in the German city for a 15-hour layover between flights. 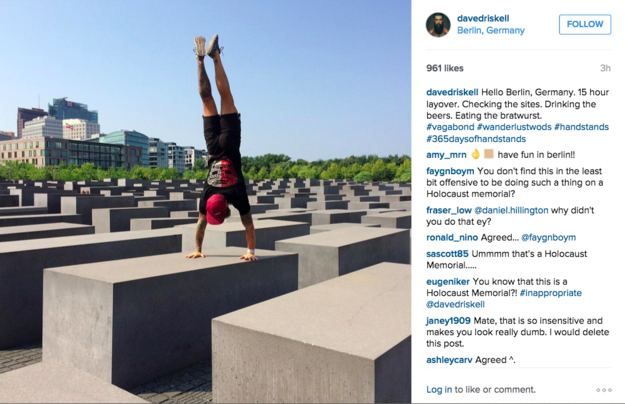 Driskell’s Instagram account is littered with handstand photos, a signature move he enjoys doing during his travels around the world. While it’s not quite the same thing as taking a selfie at Auschwitz, however, the photo is still fairly ignorant and disrespectful.

The CrossFitter has yet to provide an official comment to the press.

UPDATE – 9:35 PM E.S.T Driskell sent an email to Gawker, apologizing for the misunderstand and offense cause by his actions:

Id like to apologize for any offense the last picture I posted has caused. I had a quick layover in Berlin today with a good friend and we walked all around the city looking at and enjoying all the beauty it has to offer. We walked near this memorial not knowing what it was at the time. People were walking on the pillars. Kids running around. People sitting on them. It was gorgeous and looked visually stunning. As with all things like this I wanted a picture next to it, as I have been doing for years. I took a handstand picture with it as the background. I truly did not know what the structure was.