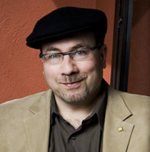 Craig Newmark looks like the kind of guy who would help you move your apartment, sell your furniture, get a job, or help you find that cute girl you saw on the subway. He does not look like the kind of guy who would kill the newspaper industry. And yet, he has been responsible for all sorts of the former (and been accused of the latter) through his once-local-now-a-sprawling-multi-city bemeoth, craigslist. It’s spelled with an unassuming lower-case “c” — just as Newmark is unassuming in person — but make no mistake, both are filled with power and purpose. craigslist, begun as an informal group email sent by Newmark in 1995, has grown to a template that is used for more than 700 local sites in over 70 countries, with over 20 billion – yes, billion – pageviews per month. Those are pageviews that Newmark refuses to monetize, incidentally; one of craigslist’s central mantras is just-enough profit (the site, which is for-profit, has famously eschewed the exploitation of those numbers in advertising and the like). Newmark, who preaches customer service with the zeal of the highly religious, is equally devoted to public service: in addition to founding the Craigslist Foundation, a non-profit that works to strengthen communities and neighborhoods, Newmark is on the board of the Sunlight Foundation, which works for government accountability and transparency, of IAVA (Iraq and Afghanistan Veterans for America), micro-donation children’s educational charity DonorsChoose.org, ConsumerReports.org, and on an advisory board to Wikipedia. He also tweets with gusto, often, oddly, about squirrels. He’s a veritable customer-service Renaissance man for the Internet age — but don’t call him a workaholic. Here’s how he Makes Work Meaningful.

Why do you love your work?

What I love about my work is that I can see firsthand that we’ve helped tens of millions of people, mostly Americans, with basic stuff. That’s like getting a job or a place to live. Beyond that, well, lots of situations like people finding a lost dog.

What is the secret to craigslist?

My take is that the use of our site shows people it’s real easy to help one another out using social media. We’re a gateway to more complex forms like Facebook.

What’s the geekiest thing that gives you satisfaction about your work that would surprise people?

It does feel good when I can remove a chunk of spam.

What do you think of the word “workaholic?” Do you see it as a positive or a negative…and would you call yourself one?

I just don’t use it, the term is dead to me. I just do what it takes, for as long as it takes.

You left corporate America (IBM, Charles Schwab, Bank of America) for your little community startup – surely before you knew craigslist would be the behemoth it is now. Yes, you look like a genuis now, but back then – were you nervous? What made you take the leap?

Do you have any mentors? Who? How have they inspired you?

Closest to a mentor is Leonard Cohen, whose everyday, real-life spirituality has reminded me that I’ve returned to my Sunday School roots without thinking much about it.

craigslist is famous for eschewing the big profit-payday. You’ve said many times that you’re not that kind of company. What gives? Don’t you like money?

I figure that it’s good to have enough to provide for the future of family, friends, self, maybe the occasional luxury. After that, more satisfying to make a difference.

…and if there are professional goals more important than money, what are they?

Working toward some common good.

You do a lot of public service. How do you think philanthropy and service fit into a busy, hectic work life? Yours, but also – everyones?

Beyond that, our site shows that it’s easy for people to help each other out via the Internet. That leads to more powerful means of working together (particularly, for example, Wikipedia).

I think we all need to work together to make things better for everyone, deriving from basic shared values, essentially Sunday School fundamentals: treat people like you want to be treated; and now and then, give the other person a break, like being your brother’s or sister’s keeper.

That means finding ways to do it. If you’re busy, the Internet makes it fairly easy to help others while you’re multitasking with other stuff. The ease of helping others via the Net is very attractive to couch potatoes like myself; I can help without removing backside from chair.

We’re a collaborative species, relying on each other to survive, and everyone needs to pitch in, now and then.

If you could have any job in the world (not your own!), what would it be?

I might want to be a journalist at the top of the profession, like Jon Stewart or Stephen Colbert, but for that, I’d need, like, talent.

Whom do you not know personally that you admire professionally? (I know you know everyone, but let’s give it a shot)

Retirement: Any interest? Ever?

This post was reprinted with permission from Rypple.com and its “I ♥ Work” series.