Alan Richman Gets Roasted By Celebrity Chefs At Le Bernardin 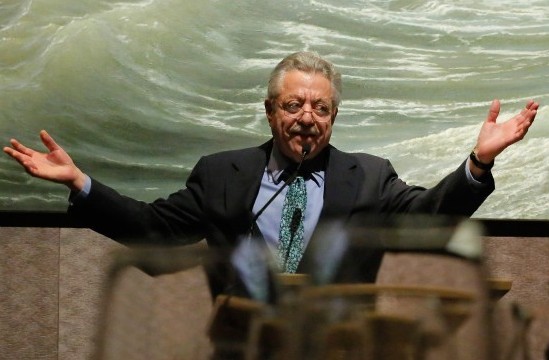 When I briefly nabbed Alan Richman for a few questions before his GQ-hosted celebrity chef roast at Le Bernardin, I encountered a man resigned to a night of being brutalized. “There’s never been anything like this for a food critic,” he said, baffled that he was also being — gasp — honored. The next part he said with a nearly perverse, masochistic glee: “Everyone here respects me, but everyone here also hates me.”

But oddly enough, though his sworn-with-a-blood-oath enemy Bourdain was scheduled last on the list of roasters — behind David Chang, Daniel Boulud, Sam Sifton, Frank Bruni, Eric Ripert, and, frighteningly enough, his ex-wife, WSJ wine critic Lettie Teague — the entire night was filled with love for the man and his 25-year career at GQ. Granted, it was the kind of love for a man whose work they all scorned and feared, whose habits left them baffled, and whose chosen targets filled them with occasional wordlessness and violent rage.

In regards to the time that Richman “dropped a giant fucking deuce” on New Orleans after Hurricane Katrina, Bourdain gleefully recounted how he got revenge through the power of television: he got Richman to appear in a scene from Treme. “I watch that Sazerac drink to the face scene over and over and over. I want to touch myself when I watch it. In fact,” he added above the laughter explosion, “I’m touching myself right now just thinking about it.”

(“Whenever people in New Orleans ask me, do I know Alan Richman,” Chang confirmed seriously, “I say very plainly that I do not know the man.”)

“My wife has a word for you — I don’t know the English word…” The French-speaking Ripert paused, as he pretended to search for the right word. “‘Misogynist’?”

“You have taught me nothing about anonymity in restaurant criticism,” the former NYT restaurant critic Sifton said flatly, recalling a time where he’d seen Richman flaunting his Moleskine like a red cape at Daniel while Sifton dined quietly under a fake name.

More than his words, though, the chefs recalled Richman’s maddening proclivities and cheap habits. Like that time he tricked Ripert into shopping at Costco. Or that time he forced Chang to see a shrink. Or every time that he wheedled the most expensive bottles of wine from Boulud, who used the word schnorrer to define him: “A Jewish beggar, pretending to respectability.”

And the entire time, as the audience laughed — Ruth Reichl, Tom Colicchio, Jonathan Waxman, and Marcus Samuelsson among them — and we journalists madly tweeted in the back, Richman spent the dinner working on retorts for each of his tormentors.

Six hundred plus words can’t quite capture the best barbs from the night (and, after Bourdain raged against listicles, we don’t feel up to the task of choosing our favorites). But no one was truly cruel to Alan Richman last night, contrary to his neurotic fears beforehand. No one can really hate a person whose habits they’ve catalogued over the years, because it takes years of knowing a person to get worked up about the way he freeloads from your wine cellar, or lies about his secret mansion, or trashes the cuisine of New Orleans and in return lets you throw a Sazerac in his face for TV.

For more about Richman’s 25-year career at GQ, including his greatest hits, visit GQ.com.