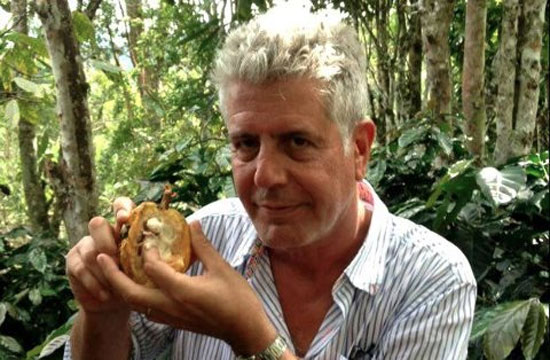 It’s a tale that seems like a mashup of Hiram Bingham and Willy Wonka: Anthony Bourdain revealed in his Tumblr that the reason he went to shoot an episode of Parts Unknown in Peru, a country he’s visited before, was to go on a quest…a quest for chocolate.

As readers might be aware, last year he and biffle Eric Ripert decided to create an $18 chocolate bar ($18!!!) using rare white cacao nibs, thought to be extinct but recently discovered in a hidden valley deep in the Peruvian highlands. But unlike Hiram Bingham, who went to Machu Picchu for glory, or Willy Wonka, who enslaved Oompa Loompas just because they’re good at making chocolate, Bourdain had ethical concerns about his obscenely pricey chocolate bar:

Was I doing a good thing? Is it OKAY to be in the chocolate business? I don’t have any problem with wealthy people who can afford making impulse buys in expensive gourmet shops spending a lot of money on my chocolate. But where does the money go? In fact… where does this chocolate come from, anyway? Just about everybody loves the stuff. It’s everywhere. A fundamental element of gastronomy. But I knew so little about it. Where does it come from? How is it made? Most importantly: WHO does it come from? And are they getting a good piece of the action? Or, are the producers, as in so many cases, getting screwed over? I very much hoped to find that whoever was growing our cacao was, at the end of the day, happy about the enterprise—that life AFTER Eric and Tony’s Excellent Chocolate Adventure was, on balance, better than life before.

Boy oh boy, there is nothing better in this world than Eric and Tony adventures, especially ones that involve shamans, vigilantes, and mudslides. And chocolate.