Around the World in 80 Plates Recap Season 1 Episode 3

Around The World In 80 Plates Recap: Nookie’s Angels 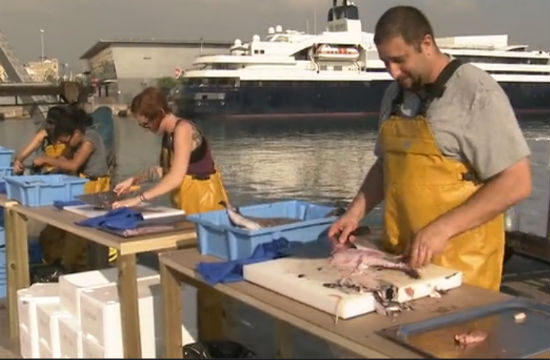 This week’s installment of Around the World in 80 Plates takes us to Barrrrthelona, which means we get to hear Curtis Stone lisp that out over and over and over again. It’s basically the best thing ever. While in transit, we get a brief relationship roundup from the chefs. Apparently, Nookie and his wife lived in Barcelona for a time and paid their rent exclusively with gambling money Nookie won playing poker in casinos. Typical. Nicole‘s long restaurant hours wound up destroying her 4-year marriage. Cheven once slept with a hermaphrodite. (JAY KAY, GUYS. Cheven’s got jokes.)

Upon arrival, and after a rush to meet Curtis by cable car (where the hell is Cat Cora? No one knows), teams find themselves split into Boys vs. Girls plus Nookie. Next part of THE COURSE? Sort, prep, and pack three different types of seafood in 25 minutes. Each item is worth a different market value, and the team with the most money banked at the end of 25 minutes wins THE EXCEPTIONAL INGREDIENT.

Chaz can’t break down merluza fillets with his wacky Spanish knife. Cheven has to bail him out. Nookie breaks down 11 cases of monkfish in like ten minutes, smoking the all-male Red Team. But the boys still win because they managed to extract more ink from squids, which was worth more money. (What are we even watching right now…?)

Time to learn more about THE TAKEOVER. First, José Andrés is coming to dinner. Wiggity what?! No, for serious. Teams must create a 3-course menu using merluza, monkfish, and squid ink. The Red Team finally learns their exceptional ingredient: red prawns, AKA, truffles of the sea. Om nom nom.

Teams head to La Boqueria to spend the money they earned from their seafood breakdown on ingredients for service. The boys suffer from too many alpha-males in the kitchen and can’t figure out how to take turns using their words. Girls + Nookie have a bit of an advantage from his years of living in Barcelona. To quote the Boston Red Sox executive chef: “It’s almost like I’m the exceptional ingredient.” Oh, Jesus. Jenna -— surprise! —- also speaks Spanish, in addition to French, as we learned last week, so she shows off at the market, chatting up every single merchant who will listen. To quote Nookie a second time, “Just get the f***ing cheese!”

Jen tries to lure Nicole into an alliance, and Nicole declines (uh, because this isn’t Survivor…?). Thus, Jenna decides Nicole is untrustworthy (and not just focusing on her food…?). Ugh. Jenna sucks. Jenna is the female Cheven.

Cheven takes front of the house for the Red Team because he speaks Spanish, but then spends zero time in the dining room. The Black Team does an homage to tapas with lots of ham and croquettes. Someone puts Chaz in charge of breaking down the merluza, even though he miserably failed at breaking it down earlier. Smooth move, guys. Of course, he spends forever on them.

First course favor goes to the Black Team, even though Red had the exceptional ingredient. Nookie’s Angels’ croquettes outshone the boys’ red prawn and mushy raw merluza. Red Team bounces back, though, on their second course. Nookie and the Angels over-cooked their monkfish and wrapped it in Serrano, which is a Spanish no-no. Dessert looks bad for the Red Team, too, because Liz’s custard isn’t set and she can’t brulee it. She begins to cry and, as we all know, there’s no crying in fine dining. The Red Team collectively makes this face: 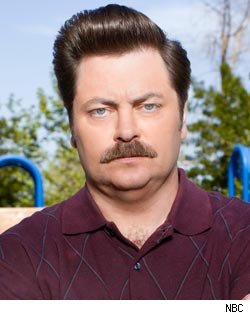 The winning team is determined by just a two-vote margin from the diners: Nookie’s Angels! Nookie obviously takes Most Valued Chef and wins immunity for next week.

The Red Team, upon deliberation, decides to ax Chevin because he’s ANNOYING, instead of Chaz, who actually made the worst food.

Next stop: Marrakech, Morocco! Awww, yeeeah. We’re about to get some dank-ass couscous up in this joint.