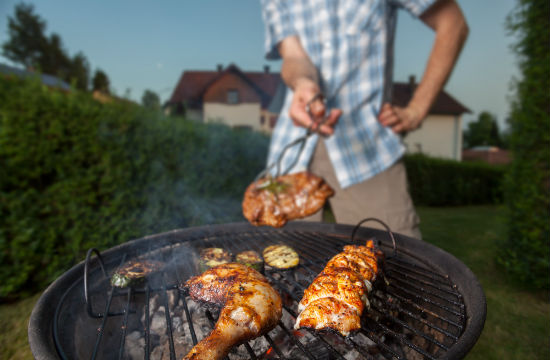 Today, we’d like to thank Adam Rapoport for behaving like a person, and subsequently becoming our hero. Earlier today, Bon Appetit ran a video roundup entitled “Dudes Grilling Things,” with a lead that originally read:

Along with an editor’s note at the top, which reads:

“Editor’s Note: We’re aware that some readers did not like our attempt to be tongue-in-cheek here. We in no way meant to imply that women aren’t just as masterful at the grill. In fact, we’d like to take this opportunity to draw your attention to some of the stories we’ve run about women who grill: Elizabeth Karmel’s 10 Commandments of Grilling; Mom Gets Her Grill On; La Buena Vida Cooks from Our New ‘Grilling Book’; and (just today!) How to Grill Maitake Mushrooms.”

In all fairness, Adam Rapoport didn’t write the post — Sam Dean did. But Adam tweeted the story out since he’s featured in one of the grilling videos. This spurned an awesome debate with Eatocracy’s Kat Kinsman, formerly a grilling editor at AOL, and a Master of Metalsmithing (no really, she has an MFA in it).

Wait, was that just a rational exchange of ideas, an admission by an editor that a cheap shot was taken, followed by a calm redaction and an apology? Way to keep it classy, Twitterverse! We’re super impressed that Rapoport copped to food sexism, because, really, Bon Appetit is no place for it. Leave that to the Esquires and GQs and Men’s Healths of the world. We’ll take them down over there. We’d prefer that BA remains a gender-neutral, all-inclusive happy place, where we can do trivial things like make fun of their envelope glue taste tests.