David Bouley is Changing His Flagship Restaurant and Himself

David Bouley is Changing His Flagship Restaurant and Himself 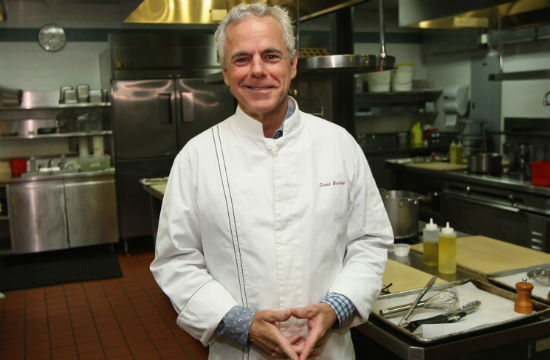 David Bouley insists that Bouley, his flagship restaurant, is not closing. In most ways, though, it feels like it is. Come Fall, the Bouley that New Yorkers have grown to know and love over the past thirty years will be no more. The blue velvet chairs will be gone, the apples will be gone, and the food will be different. Bouley prefers to say that the restaurant is moving. That it’s going on sabbatical. When New York Times writer Jeff Gordier sat down with him for an article, he made sure to write all of it down instead of just saying it. That’s how badly he wants you to know that it’s not closing.

But, this restaurant will be entirely different from what you’ve experienced before. For one thing, David Bouley himself plans to make big changes in his life. Over the last few years, he’s become “obsessed” with issues of health, so much so that he recently made enormous “impulse buy” of 300 copies of Dr. Frank Lipman and Danielle Claro’s The New Health Rules so that he could hand them out to people he met. According to Pete Wells‘ recent review of the restaurant, he’s also taken an “interest” in gluten-free bread of late. It’s supposedly delicious, byt eh way. Once Bouley goes on sabbatical in the fall, he plans to “follow that obsession as far as it will take him.”

This includes studying nutrition at NYU, meeting with doctors in France, and consulting with experts in Japan, Peru, Cuba and Switzerland. He also wants to get his M.B.A. from Harvard. He is also writing a book called The Living Pantry about healthy eating.

He hopes the new Bouley will be a place to eat, to learn, and possibly to heal. Each night, the restaurant, which will be much smaller than the current 120-seater, will offer “tasting menus engineered to address a wide variety of dietary restrictions and medical concerns.”“We’re in trouble in this country,” he told Gordier. “We have to turn this around. I really believe in this.”

If this seems like a far cry from what he’s done before, it’s not. Consider that Bouley is where Dan Barber started before he opened restaurants including Blue Hill at Stone Barns. According to Barber, Bouley is always looking to do new things. He told the Times, “He has this expression: kicking the soccer ball. He gets really anxious when he feels the soccer ball is not being kicked.”

He’s also grown a bit weary of what the restaurant business has become. He said, “I mean, it’s ridiculous how expensive everything is. I feel like I’m on a treadmill. The costs are so high. At the end of the day, I can only charge so much.” The new restaurant will be smaller and more “pared down,” without “so many employees.” Once the Bouley transformation is complete, he plans to move the rest of his restaurants into a single building in TriBeCa.

According to the Times, the transition doesn’t make him sad. He said, “I’m looking forward.”