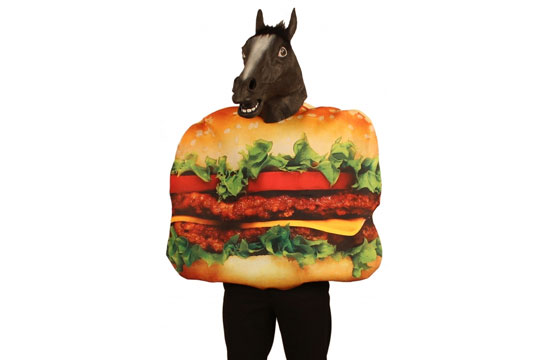 Proving that it’s never too early to get one’s hands on a topical yet hilarious Halloween costume, Business Insider reports that a costume company in England has completely sold out of its newest product: a “horse burger” costume.

But with the recent, wide-scale reports of ground beef tainted with horse meat (and the meat from other animals) all over Europe — the first incident being when horse meat was found in a burger — the joke essentially wrote itself.

“The sales are quite incredible, we literally have one left and just placed a bulk order to re-stock,” Jack Coveney, the director of the Fancy Dress Costumes retailer in the UK, told BI. “We have never had so many inquiries!”

Indeed, with the low, low price of £39.99, the horse burger costume debuted yesterday — and all 249 were sold in a little over 28 hours. The best part of the costume, however, may not be the succulent patty, the pillowy bun, or even the disturbing horse head — it might just be the product’s description:

Yay or neigh? Become the flavour of the year.

This costume is the odds on favourite at many local supermarkets.

Sad that you might not be able to wear such a costume, and you only have nine more months until Halloween? Don’t be such a neigh-sayer! (It’s contagious.) To make one at home, simply put on a burger costume and place this horse head on your own head. Presto! You’ve just gamed the system. No word yet on whether this incredibly timely news-referencing costume will still get laughs at British halloween parties come October, or if the early-adapting online shoppers will spend the whole night like “Remember? All that horse-meat controversy? Oh, bollocks.”