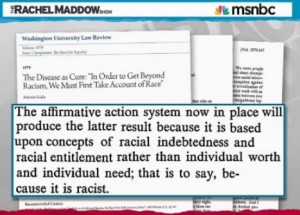 Earlier this week, I wrote about a Fox News segment in which anchor Megyn Kelly displayed a loose grasp of both facts and perspective regarding Supreme Court Justice Antonin Scalia‘s remarks about “perpetuation of racial entitlement” during oral arguments on a Voting Rights Act case. While prepping that piece, I searched high and low for more information about the “perpetuation of racial entitlement” phenomenon, which Scalia insists “has been written about,” but could find nothing. On Wednesday night’s The Rachel Maddow Show, host Rachel Maddow revealed that Scalia was, in all likelihood, citing his younger self.

In case you missed it, Justice Scalia angered many last week when, during oral arguments in the current Shelby v Holder case regarding Section 5 of the Voting Rights Act, he referred to the Act’s protections as “racial entitlement.” From the transcript:

And this last enactment, not a single vote in the Senate against it. And the House is pretty much the same. Now, I don’t think that’s attributable to the
fact that it is so much clearer now that we need this. I think it is attributable, very likely attributable, to a phenomenon that is called perpetuation of racial
entitlement. It’s been written about. Whenever a society adopts racial entitlements, it is very difficult to get out of them through the normal political processes.

I don’t think there is anything to be gained by any Senator to vote against continuation of this act. And I am fairly confident it will be reenacted in perpetuity unless — unless a court can say it does not comport with the Constitution. You have to show, when you are treating different States differently, that there’s a good reason for it.

That’s the — that’s the concern that those of us who — who have some questions about this statute. It’s — it’s a concern that this is not the kind of a question you can leave to Congress. There are certain districts in the House that are black districts by law just about now. And even the Virginia Senators, they have no interest in voting against this. The State government is not their government, and they are going to lose — they are going to lose votes if they do not reenact the Voting Rights Act.

Even the name of it is wonderful: The Voting Rights Act. Who is going to vote against that in the future?

Scalia’s meaning is comically clear, especially when you read it in context: Congress is too afraid of the blacks and their race-traitor brethren to do the right thing, and let Shelby County suppress black votes through redistricting. Even the Virginia senators!

Aside from the offensive nature of the remark, the thing that stood out to me was Scalia’s assertion that this has been “written about,” as though “perpetuation of racial entitlement” is some sort of known sociological theory that gets bandied about. My spidey sense told me that Googling the phrase might turn up some interesting provenance for this theory, maybe a conversation thread on Stormfront, but no such luck.

On last night’s Rachel Maddow Show, though, that mystery was apparently solved:

In a little known article published in 1979, when he was still a law professor at the University of Chicago, and provocatively titled “The Disease as Cure,” Scalia argued against an “affirmative-action system now in place [that is] based upon concepts of racial indebtedness and racial entitlement rather than individual worth and individual need; that is to say, because it is racist.”

Scalia’s point (in the context of a extended, slashing attack on racial preferences) was that affirmative action works on the idea that because of past discrimination, present generations owe a “debt” to those who have been disadvantaged by discrimination. Scalia, needless to say, thought that the idea was repugnant and even racist — and he said so.

Scalia would make essentially the same argument 16 years later, this time as Justice Scalia. In a concurring opinion about a decision examining a program that gave incentives to hire minority businesses, Justice Scalia wrote that “under our Constitution there can be no such thing as either a creditor or a debtor race” and that “[t]o pursue the concept of racial entitlement-even for the most admirable and benign of purposes — is to reinforce and preserve for future mischief the way of thinking that produced race slavery, race privilege and race hatred.”

All I can say is, it’s a good thing Scalia didn’t go into oncology, where the treatment relies on the sordid business of dividing cancerous and non-cancerous cells from each other, the kind of division is what led to the cancer in the first place. It’s also too bad that he went into Supreme Court Justicing.