Jon Favreau: Roy Choi Was ‘My Sensei’ on Chef 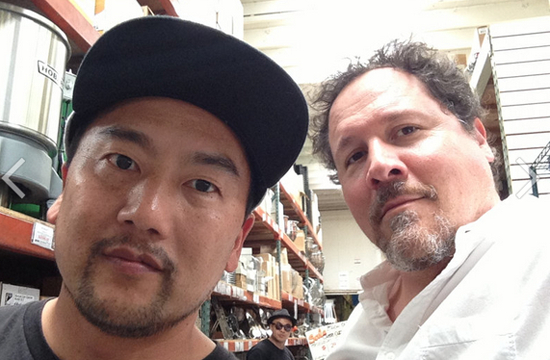 Jon Favreau premieres his much-hyped (and remarkably quickly made) Chef this weekend at SXSW, and in a recent interview with The Hollywood Reporter, he revealed an understanding of the tension in celebrity chef culture that proved he was the perfect director to make this film.

“The world of chefs is fun because these are characters who are right now being focused on by the public. They never signed on to be a front man and some are more elegant about it than others but they always seem to be coming from a very sincere place. [The movie] captures the conundrum of their creative process: people trying to find their voice, a way to fit within the system and yet express their individuality.”

That would explain why chefs we interview recoil in disgust at the designation of “celebrity.”

And on how tough he thought Roy Choi was on those Top Chef New Orleans contestants: “That’s who was teaching me! That’s my sensei. They’re all tough. They have different bedside manners but they all hold their craft to a very high standard and are hardest on themselves.”

You can read Jon’s whole interview here, and check out an exclusive sneak peek of the movie over at BuzzFeed.