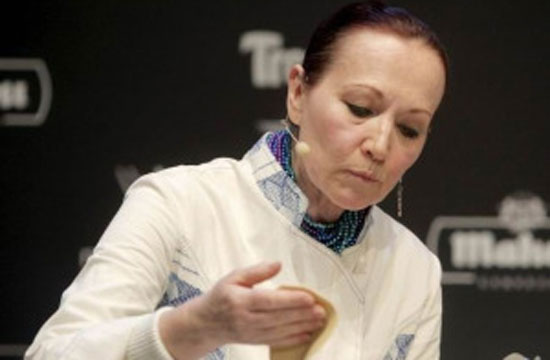 I’m holding a Lady Chef Stampede, posting about the dozens of women who’ve changed the history of food, now and in the past! Whether they’re chefs, restauranteurs, or writers, these are the women on whose shoulders we’re all standing. Today: Mexico’s official lady chef, Patricia Quintana.

It’s kind of unbelievable that the woman who is the executive chef of the Mexican Ministry of Tourism is someone I’ve never really heard of. I mean, Mexico, Canada, and the United States are all neighbors but for some reason it wasn’t until recently that I even knew she existed, which reflects badly on me. Of course, the fact that she doesn’t even have an English-language Wikipedia page doesn’t help.

Born in Veracruz, her family owned a ranch where, as a kid, she became obsessed with life on the farm, wanting to know how the crops came in, how the corn was dried in lye, how it was made into tortillas, basically everything she could about farming and ranching. She was also fascinated by the cooking her mother and grandmother did and she wanted to learn that, too. The whole experience was like food boot camp.

Later she went to boarding school in Switzerland, then cooked in France under Paul Bocuse and the Troisgros brothers. She returned to Mexico and, despite her European training, she immediately dedicated herself to regional cuisine, trying to understand, preserve, and advance traditional cooking techniques and the traditional cuisine of her country. She believes that the roots of Mexican cooking lie in corn, beans, chiles, vanilla, tomatoes, eggplant, potatoes, and chocolate, and her favorite tool in the kitchen is her molcajete. A living encyclopedia of chilis, she is also one of the few chefs who believes there’s more to Mexican cuisine than the food of just a handful of southern states, insisting that the cuisine of the north is equally as vital and worthwhile.

Speaking Spanish, English, French, and Italian, Quintana is a global ambassador for Mexican cuisine and a teacher and cooking tradition researcher. Her Mexico City restaurant, Izote, is considered one of its best, and she’s also the author of 10 cookbooks. Combining old school French concepts like wine pairings with her take on Mexican food she is probably the most high-profile chef in Mexico, but unfortunately, after 13 years, Izote closed a few nights ago. She announced in an email that for now she’ll be running a catering service called “Izote va a tu Casa.”

That’s the messed-up restaurant world we live in: one of Mexico’s most famous female chefs is now running a catering business.