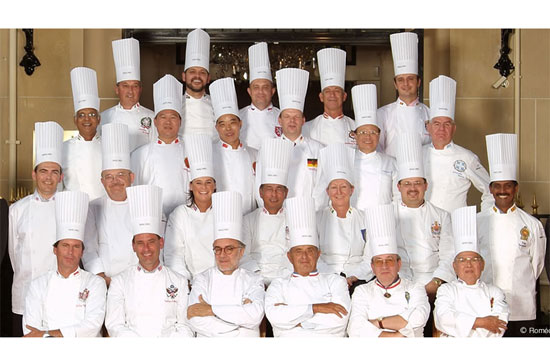 New York Times: Here in America, former Secretary of State Hillary Clinton thought she was being so novel birthing the Diplomatic Chefs Corps, but, as it turns out, some French dude made an international one up in 1977, called the Club des Chefs des Chefs. You can read about their present day adventures, cooking for Barack Obama with Chris Comerford, here.

Twitter: Sam Sifton has been laying Le Twitter Smackdown on all you “clowns” who show up to Carbone wearing t-shirts. Seriously, guys? What would Tony Soprano think?

Eater: Sorry, Husk Charleston. Your spunky, Nashville-based little sister is getting all the good toys. Sean Brock just announced that being added onto Husk Nashville is a 24-seat collaborative tasting menu space for guest chefs to come workshop. Husk Charleston is said to be pouting petulantly.

Gawker: Need an update on that fast food workers wage strike other than that hilar-tragic McDonald’s budget site that went viral? Catch up on how the movement’s gaining massive traction in the Midwest here.

The Inquirer And Mirror: In the most Nantucket tale ever, someone left a shark outside of a restaurant called The Sea Dog. Says an employee: “That’s some serious restaurant mafia (expletive).” This is how the Nantucket Mafia rolls. Next thing you know, someone will leave a cod wrapped up in a pair of red chinos on their doorstep.

The Huffington Post: Open Table bought RezBook from Urbanspoon, and then it wept, for lo, there were no more restaurant booking websites to conquer.