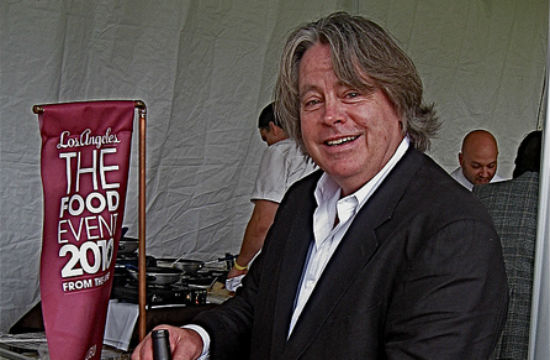 Michael McCarty is known for his love of both food and throwing parties. Couple that with the fact that his eponymous Santa Monica and New York restaurants are the place celebs, media moguls, editors, and ad men gather to see and be seen, and you can bet your ass the man has a tale or two to tell.

Back in the 1970s, Michael studied classical technique in France alongside Julia Child, herself. Meanwhile, Stateside, there wasn’t really space or tolerance for any more stuffy fine dining institutions, so, he opened Michael’s in Santa Monica, which was eventually tracked as the birthplace of New American cuisine. Ten years later, he opened a Michael’s in New York, and, after a flopped hotel attempt, a house fire, and an earthquake that caused a quarter of a million dollars worth of damage to his first resto, the two locations are still partying hard.

Michael chatted with us about everything from the good old days from where he’s seen the industry come to where he thinks it’s going. Check out our Q & A with him for more on having Jonathan Waxman on his first line, how the small plates trend reminds him of the ’80s, and the time he almost got arrested for having a sous vide machine in the restaurant.

The Braiser: Jonathan Waxman was rather famously part of your first team at Michael’s Santa Monica. Any good stories about working with him back in the day?

Michael McCarty: Oh, we had a blast [in] those days. We started in ’78 and had a great team of young chefs — Jonathan, Mandy Silverton, Sally Clark from London — and everybody stayed at my house. Jonathan was from Berkeley and he came down and he had borrowed his dad’s — you know those party vans? Those Chevy party vans — and everybody stayed at our house in Malibu. And we had a massive landslide which closed the Pacific Coast Highway, so every morning we’d get Waxman’s party van and drive up into the hills along the Saddle Peak and down Fernwood Canyon, then down the PCH to go around the slide, and every night at two o’clock in the morning, we’d get back in Waxman’s van. And we did that for about four months until they fixed the flag, and then we had like a communal thing going up at my house. It’s pretty funny. But there are way too many stories to tell about Jonathan Waxman.

So, you’ve obviously groomed a lot of up and coming chefs, but we were wondering who your personal culinary icon is?

Me, personally? Michael McCarty? I have three. The first one would be Fernand Point, and he owned Le Pyramide, a restaurant in France, and Fernand for me was one of my — he was passed away by the time that I was over there, in the early ’70s, but he was the image of what I wanted to be, which was a restaurateur who was also extremely schooled as a chef and managed an entire restaurant, both the front and back of the house. Fernand Point was probably one of the greatest of all time. From a chef’s point of view, Fredy Girardet, from the great Girardet restaurant in Crissier, Switzerland — he’s no longer there, he retired — and Tony Salomone who ran the Mayflower Restaurant, which was one of the early Italian continental cuisine restaurants, and he probably set the tone for me understanding what it meant to be a restaurateur again, somewhat in a different way than Fernand Point. [Tony] taught me how to run a restaurant.

What restaurant has served your favorite meal?

My favorite meals, they were all at Girardet. Still to this day. Girardet is still run by his chef de cuisine. It’s now his name, Rochat, and it’s maintained its three stars, and it’s the same exact restaurant as [when it was] founded in ’68.

We read that you were arrested back in the ’80s for having a sous vide machine in the kitchen in California. You have to tell us that story.

Well, we weren’t arrested. They threatened to. In the very beginning, when we bought our first sous vide machine, which was determined to be illegal by the health department, and they didn’t know what it was, and they claimed that if you cooked things at that temperature, the bacteria would be way too high, and you know, we were a pack of young kids and we sort of said [“Whatever”], and they threatened to call the feds and the cops and everybody. Finally, we removed it so that they didn’t haul our asses away because we were packed that night. Now, of course, everybody’s got [the sous vide] everywhere. 1979, nobody heard the word sous vide. I had just come back from Paris where we used sous vide on a regular basis for many different things. But, remember, there were a lot of rules and regulations in America that we had to get through. You weren’t allowed to have unpasteurized cheese. All kinds of things like that, the FDA was very strict.

So, kind of going along with that, your restaurant was the essentially the birthplace of New American cuisine as you broke away from the very stuffy, formal traditions of classical French cooking, and you’ve remained very true to your restaurant’s style. You seem to toe the line well between keeping your menu fresh and updated, while sort of rejecting the notion of venturing too far into any one food trend, like fusion or molecular gastronomy. So, we were wondering: is there any one food trend that you’re completely over?

Well, I think quite the opposite with that, and now I think finally — and you’ll see more of this, in my opinion, in the next year or two — we’re settling down. This is what occurred after the ’80s and after nouvelle cuisine in the 70s: the 80s insanity of chefs piling everything onto everything. There’s such a much more, the term would be, I guess “educated” and experienced group of chefs today, and everybody has so many different styles that, you know, in my day, in Paris in the ’70s, the word “fusion” meant Japanese-French, and now of course, we know where that’s gone. And I think that the up-and-coming generation of eaters, big eaters, really, is so educated that it’s all about taste, and they’re more than happy to try anything under the sun.

I think in America especially, in most cities, I think fine dining is really a thing of the past. I think people’s eating habits — you know, the power of choice; the smartphone has trained people of all ages now, and health and fitness. Nobody eats the same anymore. You could have a party of six, and they don’t order a first course and main course, they like tastes of this, and little bit of that, let me have some of that, what about over there… I think that’s where it is right now. I don’t really know if there’s any one trend — I mean besides molecular, but that’s like getting a PhD: Not everybody has one, not everybody wants one, not everybody needs one. I still think it’s an extremely important part of the world, but I think that when you have a giant recession, like we’ve had in the last four years here, like all the recession restaurants come up and there’s no need to spend five or ten millions dollars on a big [establishment].

You seem to have a really good feel for restaurant trends.

I love to eat. People will tell you that, that’s my main thing. I love my industry. You know, there were no Americans to learn from in my business, so I made it a habit here, as many times as I open a restaurant, of being a training institution. And you know, it’s the way that whole world works, we’ve got so many young American men and women chefs in their 20s and 30s that are just exploding, and fortunately, enough of them come from areas where you would go in the old days but never think…You go to places like North Carolina, you go to a place like Georgia, Virginia, and there’s 50 top chefs. And it’s all about the terroir.