Nigella Lawson: I Nearly Had A ‘Russell Crowe’ Moment Over The Burkini Incident

Nigella Lawson: I Nearly Had A ‘Russell Crowe’ Moment Over The Burkini Incident 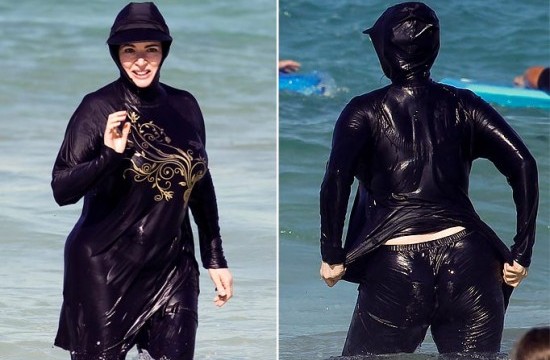 So there was this one time when the British tabloids flipped out after a photographer snapped the above photo of Nigella Lawson in a total body swimsuit, similar to the burkini worn by women at the beach in Islamic countries. Everyone was all, “WTF, Nigella? Why would you cover up your glorious curvature? Are you, perhaps, expressing solidarity with your Muslim sisters in France who were recently banned from wearing the burqa and niqab? Or are you ashamed of your curvature, which we have now deemed to be fat?”

Uh, no. As she tells Australian paper The Age, it had more to do with preventing sunburn: “I burn,” says Nigella. “I had no idea I was being observed – I wear [the burkini] because I don’t want to get burnt. I don’t think wearing it was a political statement. I certainly wouldn’t want to offend anyone.”

But though she’s not afraid to romp around in a burkini, woe to the paparazzo who snaps pictures of her children, who were with her that day. “It’s really important for me to be in the water with my children,” she adds. “My teenager was in a bikini – and [the paparazzi] were really gross, it was very intrusive. I told them off – I nearly had a Russell Crowe moment. I frightened them with the flames of the furious mother.”

Considering that Nigella is usually such a sweet lady, we fear the prospect of her Fightin’ Round The World to protect her kids. We’re staying far away from them. Please don’t throw phones at us.