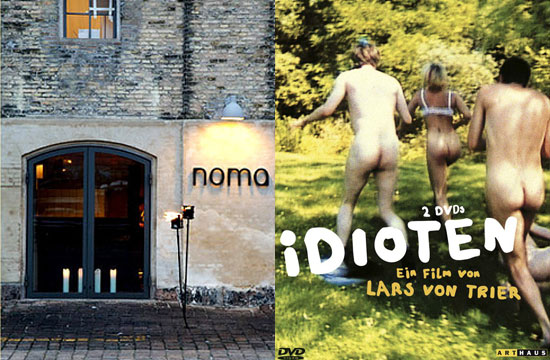 It’s time for your daily dosage of cultural psychology and sociological trends! Today’s pertinent question: why is Denmark experiencing a massive cultural renaissance — not just in its food scene, but also in its television, film, and architecture?

The Guardian ties it to Dogme 95, an avant-garde film movement whose followers attempted to purify the filmmaking process by ditching everything artificial (visuals, special effects, lighting, music — in short, Michael Bay would not be welcome here) in favor of simple storytelling. Subsequently, their films got really ballsy: its seminal film, The Idiots, was “a film shot with shaky cameras that centred on an orgy-loving group of rebels who, in public, acted like people with mental disabilities.” (Did you know this film got booed at Cannes and still was nominated for the Palme d’Or?)

The impact of Dogme 95’s ballsiness worldwide had the subsequent effect of making the Danish people, long ago resigned to backwater obscurity, realize that they, too, had balls. The article goes into Denmark’s cultural emergence in-depth, but it’s worth noting here that the world’s best restaurant, Noma, owes an enormous debt to Dogme 95:

Dogme, I discovered, had even sparked a renaissance in Danish cooking. In the mid-1990s, says Bi Skaarup, president of the Danish Gastronomic Association, “food culture was really down the pan. If mother had an evening off, you had pizza, Coca-Cola and chips.” Yet its restaurants are now world-beaters, with 12 Michelin-starred venues – 12 more than in the early 1980s. Copenhagen’s Noma has been named best restaurant in the world for three years running (sample dishes: vegetables served in a trough of earth; eggs you fry yourself).

How did this come about? Largely thanks to the New Nordic Kitchen (NNK), a movement founded in 2004 with values partly inspired by Dogme 95. [Director Lars] Von Trier and co advocated using basic equipment and props found on location. The NNK wanted something similar: local techniques and local, seasonal produce. They even had a manifesto promoting “the purity, freshness, simplicity and ethics we wish to associate with our region”.

Claus Meyer, co-founder of Noma, says: “I was very inspired by the Dogme brothers. I thought if they could do it, we could do it.”

So there you have it, folks: we would not have foraging, or lichen obsessions, or yogurt ants, if it weren’t for an avant-garde film movement consisting of naked people, even if it was a film movement that only consisted of three films.

[The Guardian via Eater]