In New Miniseries, Rachael Ray And Guy Fieri Coach Children To Fight To The Culinary Death 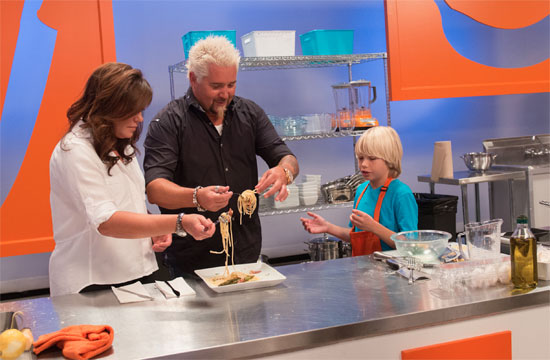 The Food Network today announced a new show that combines Rachael Ray, Guy Fieri, and eight screaming children into one epic program, and it’s called Lord of the Flies: Kill The Chefs, Drink The EVOO.

Nah, just kidding, it’s only a spinoff of Rachael vs. Guy, Celebrity Cook-Off that involves children (who are really the same mental age as the celebrities on that show).

How it works: the faerie queen Rachael and her consort Guy sneak into the homes of sleeping children, finding the naughtiest ones who also happen to have great cooking skills (and the pretentious vocab to explain their dishes on national television). They then spirit the eight kids away to a castle on a faraway, magical island called Manhattan, select their favorites, feed them ambrosia and manna (really, just Luna Bars and sugar-free Red Bull thrown in a blender), and then pit them against each other in cooking battles for their entertainment in the faerie world of the Food Network.

Occasionally they will bring in other members of their coterie to judge: Richard Blais, Duff Goldman, Jennie Garth (yep, from Beverly Hills, 90210) and Marion Ross (Happy Days) are scheduled to appear as guests on the miniseries. But only one prodigal chef can win, staying eternally young on the internet with a Food Network webseries, while the rest are tossed back into the mortal world to age, grow old, and fade into non-Food Network obscurity.

Poll: does this series sound more like A Midsummer Night’s Dream or Lord Of The Flies? Or really, is it The Hunger Games? Is the trope of “children fighting each other for the entertainment of grown-ups” one that stretches back for centuries? Isn’t it funny to watch children fight each other for things like cake or affection? What’s up with Guy Fieri’s hair (amirite)?