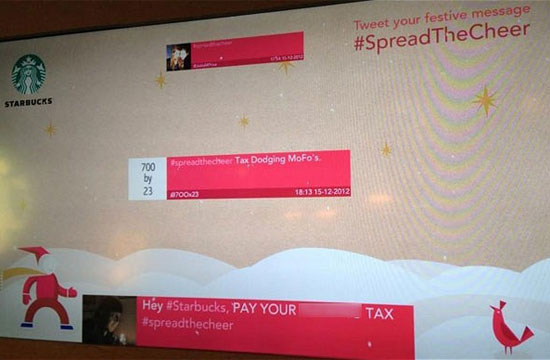 There should be a new PR handbook in which the rule “never run a social media campaign when you’re embroiled in controversy” is written in big, red letters, and every time someone even thinks about violating said rule, the handbook turns into a robot hand and then slaps them in the face.

We have no idea what compelled Starbucks’ social media team to run a holiday Twitter campaign while under public scrutiny for tax evasion.

The Telegraph reports that when Starbucks UK asked its followers to tweet out holiday greetings followed by the hashtag #spreadthecheer, which were then publicly broadcast onto a big screen at the Natural History Museum’s skating rink, it definitely did not receive the happy tweets about family and snow and Santas and Hanukkah things it hoped it would. Instead, people used the hashtag to slam the company for only paying £8.5 million in corporate taxes since it launched in Britain, despite overall sales of £3 billion.

And, of course, Starbucks totally forgot to filter the tweets, so all the profane ones got through, such as:

And so forth. A spokesperson for Starbucks blamed the publicly-displayed profanity on a ” temporary malfunction with the content filtering system,” but that’s yet to stop people from tweeting about Starbucks’ tax evasion schemes — or worse, media outlets reporting on their PR screw-up with rapacious glee.