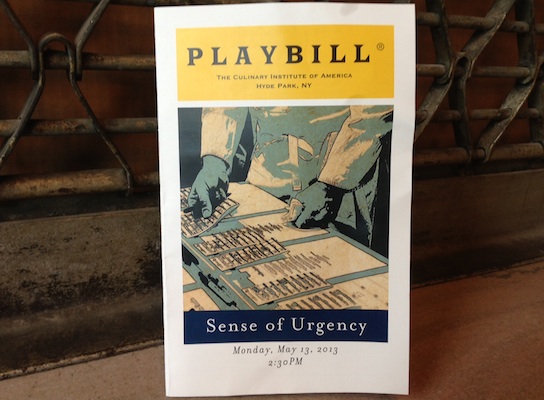 Thanks to a low-key advertising campaign consisting of a few flyers and an incredible feat of secrecy on the administration’s part, the students and faculty at the Culinary Institute of America (CIA) thought they were walking into a “cooking demonstration” where some of America’s most celebrated chefs would, well, cook.

But to their surprise, they were treated to Thomas Keller, Grant Achatz, Jonathan Benno, and Eli Kaimeh setting up their stations, tying their blue aprons, and re-enacting a full night of service at The French Laundry.

As part of the CIA’s “Thomas Keller Day” celebrations, Keller and his colleagues at the French Laundry — alumni, front of house staff, and purveyors alike — decided to, quite literally, turn the concept of “the restaurant as theater” on its head. On a set built to look like the French Laundry’s kitchen, down to the (fake) video feed of Per Se and the “Sense of Urgency” clock on the wall, the nine-person crew plated a real, completely edible, nine-course meal, Oysters and Pearls to Salted Caramel “Ganache,” carted away by professional service captains from Per Se.

In a “Playbill” handed out to the audience before the presentation (yes, there was even a Playbill, yellow header and all), Keller wrote that he wanted to show, rather than simply tell, the story of running the most famous restaurant in the world. “We thought about doing a demonstration,” he admitted. “But how many cooking demonstrations have you seen? Dozens? Hundreds? Thousands? The point is: lots.”

Hence, the one-act play, entitled Sense of Urgency. “Our goal in the culinary theater is to present you with an intimate look at service in one of our restaurants,” Keller continued. “It’s a performance that involves a great number of actors: in the kitchen, in the dining room, and beyond.”

To drive that point home, his maître d’, sommelier, and suppliers delivered monologues between courses, speaking to the enraptured student audience about their roles in Thomas Keller’s universe. As the kitchen lights dimmed, leaving the chefs frozen in place (sometimes in awkward positions), they stepped forward to a podium, dressed in the uniforms of their day jobs (suits, flannel, fisherman’s gloves, beards), and described what they did every day: Ariane Daguin of the duck farm D’Artagnan raised “happy birds.” Larry Nadeau, the maître d’ at The French Laundry, laughingly described seating arrangements, helping customers with zippers (“The female ones, not the men!”), and occasionally cleaning up after drunk customers. The Mast Brothers, resplendent in their hipster beards and tales of artisan chocolate, praised the virtues of Brooklyn’s DIY ethic to a crowd of college students.

With the size of the cast and the talent involved (the stage had a collective nine Michelin stars) and the fact that Thomas Keller Day came into existence only 34 days ago, the play surprisingly remained a secret at the CIA’s campus — even among the administration, students, and security.

“I’m assuming that the Powers That Be knew, considering that they had to build this set,” said Marketing Director Stephan Hengst, who mysteriously canceled our morning interviews with Keller and Achatz for reasons even he didn’t know of then (it was eventually revealed that the ad hoc cast needed more rehearsal time). “But all we knew is that it was a ‘cooking demo.’ I heard some students outside going, ‘There’s this weird thing going on. I’m not sure what they’re doing. But it’s really cool.'”

“I think they wanted to do it for the benefit of the students more than for all the tourists coming in,” speculated Miranda Crenshaw, a recent CIA graduate-turned-teaching assistant who, like everyone else, had no idea that Keller was putting on a play.  But she praised the surprisingly “different” format of the demonstration: “I think students need to be reminded, frequently, of where all the food comes from. We forget what we’re using and where it comes from, and that it has a source.

“Everyone focuses on ‘The chef! The chef! The chef!'” she added. “But like Keller was saying, you have to surround yourself with people who are smarter than you, and come from different backgrounds, because they may have different approaches to an issue. The way he was sitting down at the table [surrounded by his chefs, planning tomorrow’s menu] at the end is a symbol of the collaboration that has to occur for real greatness and true creativity to emerge.”

For the most part, though, the students just enjoyed the chance to watch service in one of the toughest kitchens in the world. “I was not expecting that,” said a freshman who would soon extern at Per Se. “It was definitely a pleasant surprise.”