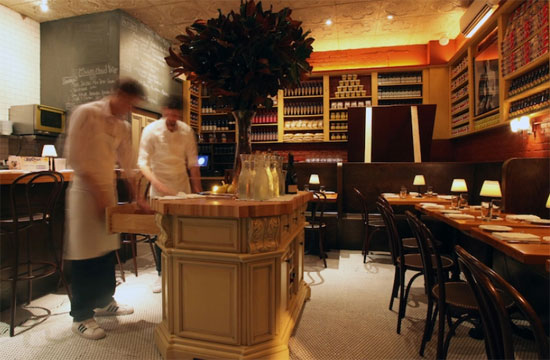 Last night, the Guardian UK’s restaurant critic Marina O’Loughlin attempted to visit the famous Torrisi Italian Specialties while on a whirlwind restaurant tour of New York City, only to be turned away at the door:

Thank you, Torrisi Italian Specialties for failing to honour our reservation. Shame there are so few other restaurants in NYC. #next!

Normally, this wouldn’t happen with a restaurant critic from a prominent newspaper (think of all the times Pete Wells has been recognized!), except for the fact that O’Loughlin is 1) notorious for maintaining her anonymity in the era of Internet, and 2) is from England and therefore, in the minds of many Americans, simply doesn’t exist. (To many Americans, the only English people that exist in the world are Kate Middleton, Pippa’s butt, that robot wheelchair genius, and Prince Harry’s schlong.)

Oddly enough, the owners behind Torrisi’s Italian Specialties, Rich Torrisi and Mario Carbone, were behind another restaurant, ZZ’s Clam Bar, that once kicked out a restaurant critic mid-meal. Nothing indicates so far that kicking out restaurant critics is standard practice (and it would be impossible, given that no one knows who the hell Marina O’Loughlin is), but the two incidents following each other is…rather strange.

In any case, O’Loughlin decided to take her business elsewhere that night, while the outrage began pouring in:

RT @mel_huang: @MarinaOLoughlin not surprised. #Torrisi is one of those utterly-overrated places where they have their heads up their arses.

Shame about #Torrisi as it was a rec from @pete_wells too.

And now all that’s left is O’Loughlin’s actual review of the place, which we eagerly anticipate, because there is no one in the world who can tear people apart like the British. They invented the art. We bow at their be-talon’d feet.

RELATED:
Pete Wells Calls Out Daniel Boulud For ‘Coddling’ Critics At Expense Of Normal Diners
Witness The Power Of A NYT Critic In This Review Of Dale Talde’s Restaurant
New York Magazine Critic Booted from Restaurant in Middle of His Meal