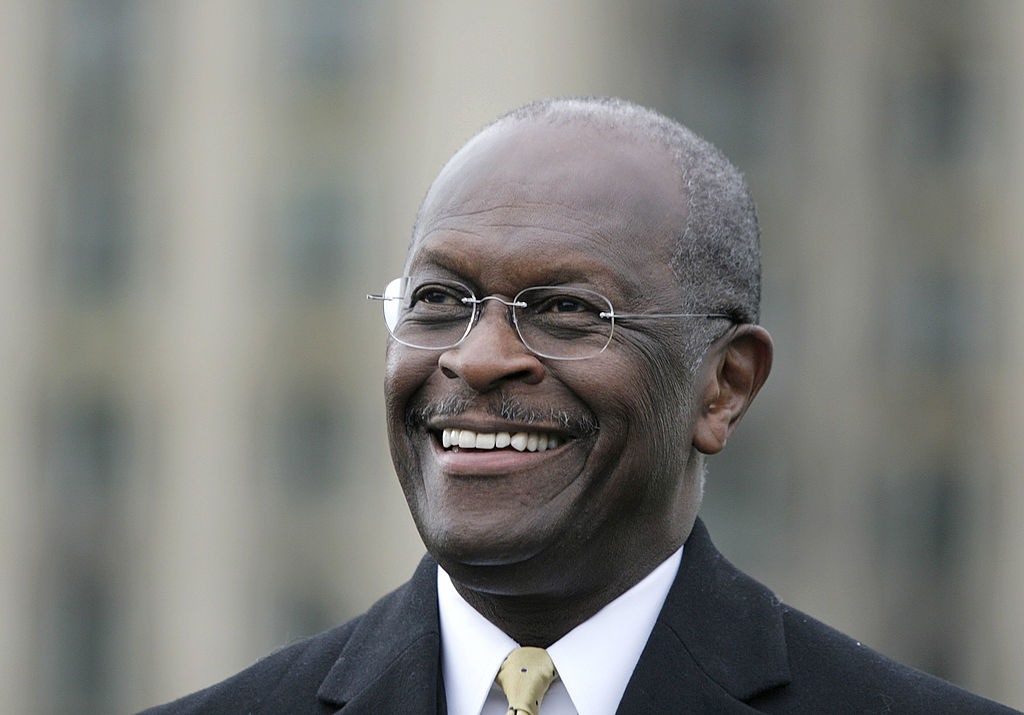 Conservative luminary Herman Cain died this week after a brief battle with the coronavirus. He was 74.

Cain, who ran for the Republican presidential nomination in 2012 and previously served as CEO of the Godfather’s Pizza chain, was hospitalized in early July after testing positive for Covid-19.

Dan Calabrese, the editor of HermanCain.com, posted a heartfelt remembrance of Cain on the website Thursday morning, writing, “We’re heartbroken, and the world is poorer: Herman Cain has gone to be with the Lord.”

The development comes as a shock after a Monday update on Cain’s Twitter that suggested he was recovering. “We know it’s been a few days since we last gave you an update on the boss,” the message said. “But he is still in the hospital being treated with oxygen for his lungs. In the meantime, the doctors say his other organs and systems are strong.”

He announced that he was admitted to a hospital to receive treatment on July 1, shortly after attending a June 20 rally for President Donald Trump in Tulsa, Oklahoma.

Cain, who previously survived a 2006 diagnosis of stage 4 colon cancer, rose to national prominence during his 2012 presidential bid, despite suspending his campaign shortly before the first votes were cast in Iowa. He obtained national media attention during the campaign especially for an ad in which chief of staff Mark Block was featured smoking a cigarette over the Krista Branch song, “I Am America.”

Cain subsequently founded THE New Voice, a conservative advocacy group, and hosted a talk radio show. He took over Neal Boortz’s radio show in 2013, and more recently served as a commentator for WSB in Atlanta. He had also been set to launch a weekly show with Newsmax TV.

Born in Memphis, Tennessee, Cain described his upbringing as “poor but happy.” He graduated from Morehouse College with a degree in mathematics before obtaining a master’s degree in computer science from Purdue University.

In 2011, Herman Cain told me a story about growing up during segregation in Atlanta, Georgia. His campaign turned our interview into this ad. I’ll be thinking about it today. RIP! pic.twitter.com/u8uiQRxSOH

Ellen Carmichael, who served as communications director for Cain’s 2012 presidential campaign, recounted Cain hiring her for the role when she was 23. “This is a man who grew up in a house that had three rooms in it,” Carmichael wrote. “His mother was a domestic worker (he would never say ‘maid’), and his dad worked three jobs to survive. He and his brother would argue over who would get to sleep on the cot and who had to sleep on the floor.”

Carmichael noted Cain “rose up the ranks of Coca-Cola, Pillsbury and Pepsi” and turned Godfather’s Pizza around “from bankruptcy to solvency in 14 months,” adding, “This man knew business and he knew people. His signature approach was to go to the people closest to the problem to solve it. It worked.”

Cain also served as an ordained associate minister at Atlanta’s Antioch Baptist Church. He is survived by his wife, Gloria, whom he married in 1968, as well as two children, Vincent and Melanie, and four grandchildren.