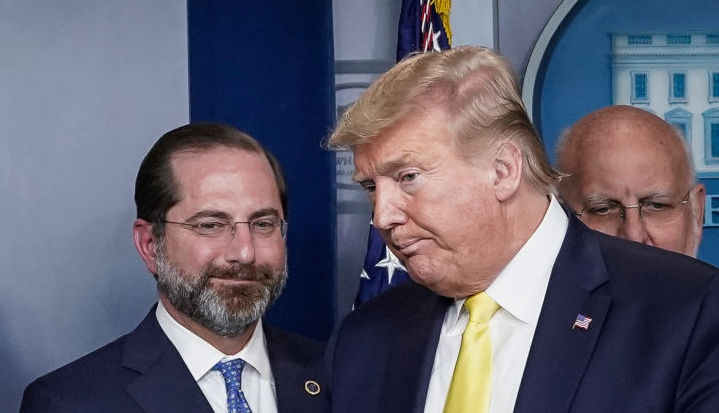 Health and Human Services Secretary Alex Azar appointed one of his key aides, a former Labradoodle breeder from Dallas, to lead his agency’s early response to the coronavirus pandemic task force.

According to reporting from Reuters, Azar turned to his personal chief of staff, Brian Harrison, to take charge of the HHS’s day-to-day response to Covid-19 in early January, after the cabinet official reassured the public that “we have a playbook” for the outbreak.

“The aide, Brian Harrison, had joined the department after running a dog-breeding business for six years,” Reuters reported on Wednesday. “Five sources say some officials in the White House derisively called him ‘the dog breeder.'” The story goes on to detail a highly disorganized response within the HHS, which was marred by miscommunication and internal finger-pointing.

The 37-year-old Harrison’s official HHS bio notes his prior experience working in the office of the then-Deputy HHS Secretary Azar in the George W. Bush administration, which Reuters notes involved a one-year stint as a “confidential assistant.” as well as unspecified jobs in the Social Security Administration, the Department of Defense, and the Office of the Vice President at the White House. It makes no mention of his years as dog breeder, only noting he “ran a small business in Texas.” He has no formal background in public health.

This relative lack of experience of an official placed in a key role to handle a massive public emergency evoked Bush’s appointment of a former lawyer and horse breeder, Michael Brown, to lead FEMA, which was excoriated for its incompetent response to Hurricane Katrina. Brown was quickly demoted and then resigned just two weeks after the hurricane hit and his agency’s bungled efforts to aid Louisiana prompted a national outcry.

HHS did not make Azar available for an interview, as the agency’s spokesperson, Michael Caputo, offered this response instead: “We are communicating to the American public during a deadly pandemic.”