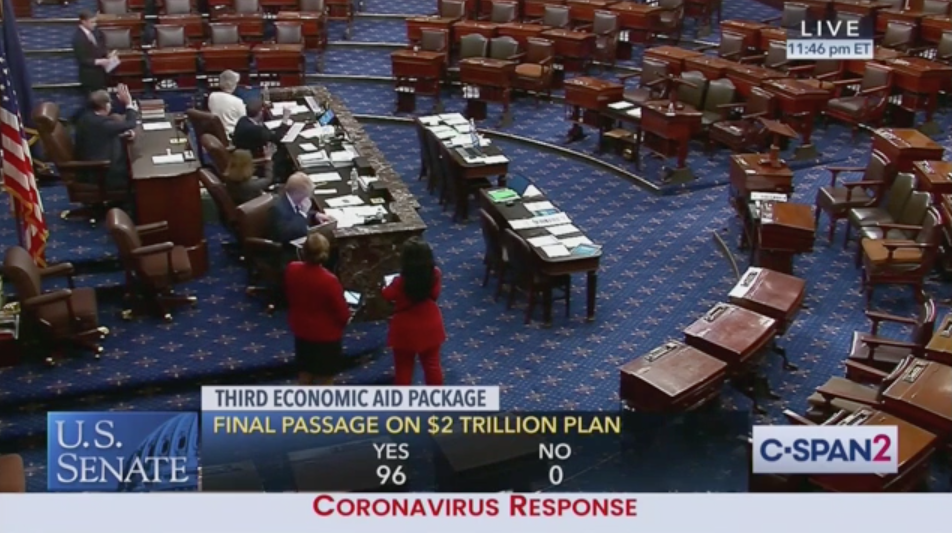 To underscore the widespread impact of the COVID-19 outbreak on the country, several senators were not present for the vote because they were self-quarantining because of the virus.

The massive bailout package marks the third and, by far, most expensive attempt to stabilize a U.S. economy shattered by the pandemic. The 880-page bill’s specifics were hammered out on Tuesday in a marathon negotiating session between Senate Democratic leaders and Treasury Secretary Steven Mnuchin. Included in the stimulus are a $500 billion bailout fund for industries, one-time direct payments to citizens for up to $1,2oo per adult and $500 per child, as well as other funding set aside to help small businesses ($300 billion), local and state governments ($150 billion), and hospitals ($130 billion).

The final vote was held up on Wednesday after a handful of Senate Republicans objected to a provision added at Democrats’ behest that allocated an additional $400 billion in federal unemployment insurance on top of each state’s benefits for those who have lost their jobs during the crisis. An amendment to strip out that unemployment benefit failed to reach cloture before the final vote on the bill.

The unprecedented stimulus package, which all of Washington has urged speedy passage of, now proceeds to the House. But complicating the bill’s ultimate route to President Donald Trump’s desk, however, is the fact that the Senate officially went into recess after Wednesday night’s vote until April 20. So, any changes to the stimulus bill as it moves through the House would require calling Senators back to the Capitol for another emergency vote.