In the video, which was uploaded to YouTube last Thursday, Peters took of her mask at the Trader Joe’s checkout and refused to put it back on when asked by a worker at the store.

As the worker called the police, Peters complained, “They’re literally calling the police on me because I’m not putting this mask on,” before explaining she didn’t want to wear a mask because “it’s unhealthy for me.”

“I don’t want to breathe my own CO2. There’s many researchers,” she insisted. “They’re bogus rules… It’s ridiculous. There’s so much research that says we actually are in danger of having this mask, of breathing my own CO2. Do you understand that?”

“I’m not endangering you because I’m a healthy person,” Peters said.

Peters then went on to make a scene for 20 minutes, arguing with workers, before finally leaving the store. But in a bit of creeping irony that was flagged by Right Wing Watch’s Jared Holt, things have taken a turn for Peters.

On Thursday, exactly one week after uploading her video, Peters uploaded another video to her Facebook page — which has over 7,000 followers — captioned, “Health Update after yesterday’s sore throat and lymph nodes.” 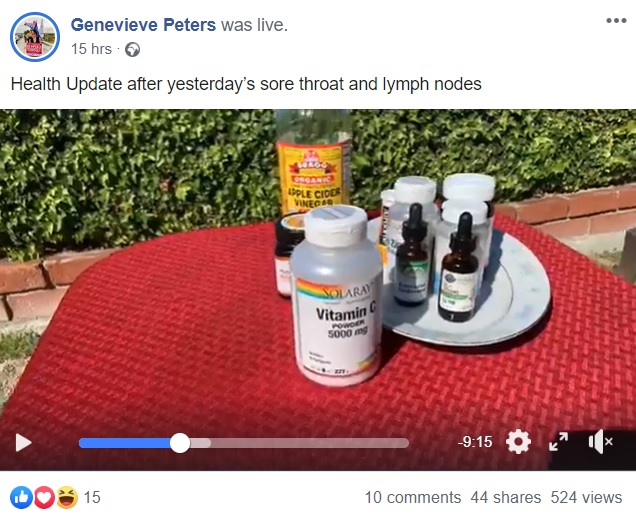 “Yesterday, I let you guys know that I had a sore throat and it was feeling like it was going into my lymph nodes, and the reason I posted it was because I knew I had zero fear that I will be a statistic on the Covid-19,” Peters declared. “I’m not saying I might not get it, I might get it, I mean anyone could get it, right? I mean, it’s like the flu. I’ve had the flu many times in my life. But I’ve survived it.”

“And the reason I put it out there is I wanted to show that if you start feeling symptoms, there is zero panic. Zero panic. Why? Because I’m healthy. Healthy people can get sick… It doesn’t mean the end,” she continued, adding, “There’s bacteria, there’s viruses, they’ve been around for millions of years, really, and the most important thing is that our body is equipped for that.”

“It has what we call an immune system. So when I was feeling sick yesterday, I knew that all I had to do was boost my immune system,” Peters concluded, before showing off an array of natural remedies she had acquired.

A sore throat is on the Center for Disease Control and Prevention’s (CDC) list of coronavirus symptoms.

On her Facebook page, Peters describes herself as a “Rabid Lover of America, Freedom, the Constitution and the GREATEST PRESIDENT Donald J. Trump!”