26% of the World Is Anti-Semitic and 46% Unaware of Holocaust, Survey Finds

26% of the World Is Anti-Semitic and 46% Unaware of Holocaust, Survey Finds 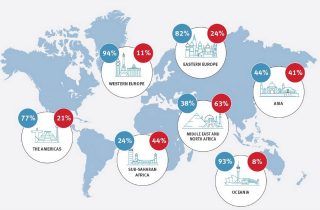 Only 54 percent of adults around the world have heard of the Holocaust, according to “The ADL Global 100: An Index of Anti-Semitism”, a far-reaching survey released this week by the Anti-Defamation League.

The survey of 53,100 adults attempted to measure anti-semitic attitudes in 102 countries around the world by asking respondents their impressions of a series of 11 stereotypes about Jewish people. 26 percent of those who responded hold strongly anti-Semitic views, they found.

“For the first time we have a real sense of how pervasive and persistent anti-Semitism is today around the world,” Abraham H. Foxman, the ADL’s National Director said in a statement. “The data from the Global 100 Index enables us to look beyond anti-Semitic incidents and rhetoric and quantify the prevalence of anti-Semitic attitudes across the globe. We can now identify hotspots, as well as countries and regions of the world where hatred of Jews is essentially non-existent.”

The results have been compiled into an interactive website, which can be viewed here.

The index was created by asking people to answer whether or not the following statements were “probably true” or “probably false.”

On the whole, the survey found, 24 percent of Christians are in the Jews=bad club, while 49 percent of Muslims agree.

Other interesting findings include that no one seems to know just how many Jewish people there are in the world. 18 percent of respondents believed the total Jewish population is over 700 million. It’s actually 13.7 million. 2 out of every 3 people surveyed had either not heard of, or do not believe the historical accuracy of the Holocaust.

74 percent of respondents had never met a Jewish person.